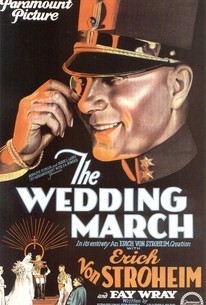 Auteur director von Stroheim stars as decadent, yet likeable, Austro-Hungarian Prince Nikki who forsakes crippled bride-to-be Zasu Pitts for peasant maiden Fay Wray. With scenes in Technicolor, this artful film was intended as the first of two -- until its controversial release further widened the rift between 'Von' and Hollywood execs.

Albert Conti
as Officer of the Imperial Guard

Anton Vaverka
as Franz Joseph I

Carey Harrison
as Officer of the Imperial Guard

William Von Brincken
as Officer of the Imperial Guard

Christina Weiss Lurie
as Maid to Cecelia
View All

Critic Reviews for The Wedding March

From all this strife and toil, there comes forth at last a good picture, not perhaps so enthralling as Four Devils, or as ingenious as Lonesome, but one well worth seeing.

As this extravagant, wickedly ironic 1928 melodrama shows, Erich von Stroheim was not only a supreme (if typecast) actor but one of the greatest silent-era directors.

One of the most eccentric and fascinating vanity projects in the history of film.

Because of what they are called upon to do and not because of the performances of the players the characters are not much more human than a troupe of Robots.

It is the love scenes, played beneath shimmering apple blossoms in lyrical soft focus, that stick in the memory, ironically turning what is now the film's ending into one of the director's most bitterly pessimistic scenes.

Even minor Stroheim is considerably better than most other filmmakers' major work.

All the absurdities in The Wedding March are typical of [von Stroheim,] who has in the past demonstrated a tendency to be a genius at one moment and an utter nit-wit at the next.

[The Wedding March] is interesting only for its insistence on realistic detail -- an insistence so shrieking and sometimes so incongruous that it loses even the little virtue that one might be willing to concede it.

The current school of critical thought is that 'The Wedding March' is a minor Stroheim effort, but I find it to be one of his most complete and most satisfying films.

An astonishing portrait of decadent Imperial Austria that's one of the greatest of all silent films, even in its butchered extant version.

Some beautiful cinematography distracts from the dramatic inadequacies, but it's not the best product of its time.

Audience Reviews for The Wedding March

another epic from the mad genius von stroheim, who seems to like to cast himself as a dashing ladies' man. this film comes in at under 2 hours, which surprised me til i learned it was split in two parts, the second called 'the honeymoon'. sadly, the second half has been lost but what remains is the charming tale of a hapsburg prince who loves the ladies, especially a beautiful peasant played by fay wray. however the prince is a wastrel and his aristocratic parents are broke so they give him a choice: marry money or shoot himself! this is on internet archive, with some scenes in early technicolor