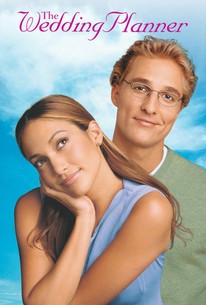 Critics Consensus: Instead of being light and charming, this romantic comedy is heavy-handed and contrived in its execution. Also, it's too unoriginal.

Critics Consensus: Instead of being light and charming, this romantic comedy is heavy-handed and contrived in its execution. Also, it's too unoriginal.

Critic Consensus: Instead of being light and charming, this romantic comedy is heavy-handed and contrived in its execution. Also, it's too unoriginal.

This lighthearted romantic comedy in the tradition of Runaway Bride (1999) casts Jennifer Lopez in the Julia Roberts mold. Lopez stars as Mary Fiore, an ambitious and successful San Francisco wedding planner who works only for the most wealthy and exclusive clients but who is also a perpetual single. Pressured by her father Sal (Alex Rocco) to settle down, Mary is saved from a collision with an out of control dumpster by Steve Edison (Matthew McConaughey), a successful pediatrician. After sharing a romantic evening and a dance together, Mary learns that Eddie is engaged and that she's being hired by his controlling fiancée Fran (Bridgette Wilson-Sampras), an Internet tycoon, to plan their lavish wedding. The directorial debut of former choreographer Adam Shankman, The Wedding Planner costars Kevin Pollak, Judy Greer, and Kathy Najimy.

F. William Parker
as Father of the Bride, Mr. Bartlett

Adam Loeffler
as Boy in Hospital

Chelsea Hollingsworth
as Girl in Hospital

Bianca Brockl
as Girl in Hospital

Rocco Vienhage
as Man
View All

News & Interviews for The Wedding Planner

View All The Wedding Planner News

Critic Reviews for The Wedding Planner

From the very first scene, in which she comforts a distraught father by handing him a Valium from her trusty catch-all kit all while juggling three or four other minor crises, Lopez fills the screen.

Suffers particularly in inevitable comparison with My Best Friend's Wedding.

McConaughey is insufferably smug as always, while the bewilderingly miscast Diva appears bored and impatient.

Occasionally so inept and embarrassing that it's almost physically painful to sit through.

Jennifer Lopez and Matthew McConaughey have no chemistry. None.

Not so much a movie than just another tool in the entertainment-world-domination plot concocted by the burgeoning, big-butt-blessed multimedia phenomenon nicknamed J. Lo.

The script recycles every cliché you could possibly imagine (and then some).

The Wedding Planner is a bit of fluff, but fluff can be entertaining taken in light doses.

Its manner is as light as wedding cake frosting and its lead performances are as poised as the bride and groom at the top of the cake.

Although Lopez projects her usual charisma here, McConaughey seems as out of place as Will Rogers playing Rhett Butler.

One of the more confused romantic comedies.

Jeffrey Chen
Window to the Movies
View All Critic Reviews (105)

Audience Reviews for The Wedding Planner

Too many stereotypes. Just the kind of rom-com I don't really like.

I loved this film. One of Jennifer Lopez best films. A really great romcom!

Good rom com about a chance meeting of a couple who fall for each other. Only to discover the guy is getting married and the girl turns out to be his wedding planner.

Jennifer Lopez does not know how to act. not a good film at all.