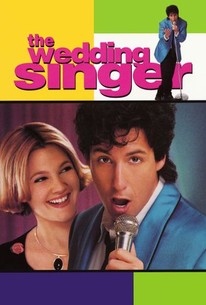 Critics Consensus: It's decidedly uneven -- and surprisingly sappy for an early Adam Sandler comedy -- but The Wedding Singer is also sweet, funny, and beguiling.

Critics Consensus: It's decidedly uneven -- and surprisingly sappy for an early Adam Sandler comedy -- but The Wedding Singer is also sweet, funny, and beguiling.

Critic Consensus: It's decidedly uneven -- and surprisingly sappy for an early Adam Sandler comedy -- but The Wedding Singer is also sweet, funny, and beguiling.

Mousse up your hair and pull your Missing Persons records out of mothballs for this romantic comedy set in that era of questionable fashion decisions, the '80s. In 1985, Robbie Hart (Adam Sandler) is a vocalist whose rock band stubbornly refuses to get off the ground. In the meantime, he makes a living playing wedding receptions, where his easy charm and ability to schmooze brings him a steady income. Robbie meets Julia Sullivan (Drew Barrymore) when she's working as a waitress at one of his wedding gigs; he immediately takes a shine to her, but since he's engaged, he keeps his distance. Robbie learns that Julia is also engaged; unfortunately, her fiancÃ (C)e Glen Gulia (Matthew Glave) is an obnoxious, self-obsessed yuppie who is chronically unfaithful to her. When Robbie gets stood up at the altar by his fiancÃ (C)e, it's a crushing blow to his ego, and he moves from working weddings to bar mitzvahs to avoid the humiliating issue of matrimony, and he considers giving up on music altogether. In time, Robbie realizes that he needs to step in and stop Julia from marrying Glen before the woman he's come to love ruins her life. Adam Sandler's former Saturday Night Live co-stars Kevin Nealon and Jon Lovitz make cameo appearances, as do Steve Buscemi and Billy Idol -- as himself. ~ Mark Deming, Rovi

Billy Idol
as Himself

Jack Nisbet
as Father of Groom

Earl Carroll
as Justice of the Peace

Mark Lonow
as Father of the Bride

Matthew Kimble
as Drunk at Bar

Andrew Shaifer
as Flight Attendant No. 2

Shanna Moakler
as Flight Attendant No. 3

Critic Reviews for The Wedding Singer

Supporting players are uniformly strong, and Coraci deserves much credit for exacting just the right degree of outrageousness without spinning into some wild orbit.

You can't help pulling for the kids.

Finally, an Adam Sandler comedy that you can sit through without wanting to throw a mallet through the screen.

As Robbie Hart, a former lead singer in a rock band reduced to performing at weddings, Sandler goes for more than the easy laughs.

At its best, it is a gentle, well-portrayed, feel good film.

A sparkling romantic comedy, the kind of picture that glides by so gracefully and unpretentiously that it's only upon reflection that you realize how much skill, caring and good judgment had to have gone into its making.

So funny and charming, with some excellent cameos.

There's some cheap nostalgia at play here (okay, maybe a lot) but it's more than made up for with genuine laughs and a ton of heart.

Puppy charm, retro-hip and some good old-fashioned romantic chemistry lift a traditional comedy to the brighter realms of a pleasant, quirky and genuinely touching slice of matinee entertainment.

The chemistry between Sandler and Barrymore is something special to see here, and I think 'The Wedding Singer' ends up being Sandler's best movie.

Not the most original comedy, but many will enjoy.

The tone set by director Frank Coraci tends to the cartoonishly broad while making jokes at the expense of grotesques. [Blu-ray]

Audience Reviews for The Wedding Singer

If you love 80s cheesy music, this is a must see. Julia and Robbie are engaged to wrong people. He is a wedding singer and she is a waitress. Drew and Adam make a great on-screen couple. Adam is a good singer. Cute rom com.

Get some cheese balls, dunk it in cheese whizz, throw sharp cheddar cheese on top and you get "The Wedding Singer". Yup. So cheesy... everything within this movie is a recipe for disaster, yet the romance works -- what the hell? The comedy falls flat almost every single time and Drew Barrymore is one horrible actress, yet at the end of the day, you'll find "The Wedding Singer" somewhat pulling on your heartstrings.

Easily one of my all time favorite Adam Sandler movies. Love the 80's throwback, and all the little references, especially the music. Sandler is Robbie Hart, a wedding singer who gets left at the alter. Depressed, he then meets Julia Sullivan(Drew Barrymore) a waitress about to be married. He helps with her wedding planning, and they eventually fall for each other. typical romantic comedy, with Sandler's touch of frat boy humor that works perfect. Watching this on a Saturday morning for the first time in years, I found myself remembering every line, laughing at the same jokes, and singing the same songs. Watching this movie is like riding a bike, you just never forget.

It's ehhhhhh. I do not like when Adam Sandler talks in a weird voice.