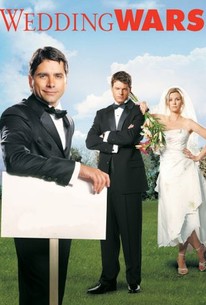 A gay wedding planner backs out of a promise to organize his brother's nuptials after discovering that his sibling's future father in law is a politician who opposes gay marriage and that the future groom himself supports the conservative fundamentalist agenda. Shel (John Stamos) is a gay party planner. Ben (Eric Dane) is a campaign manager for a right-wing governor (James Brolin) and the soon to be husband of said politico's beautiful daughter (Bonnie Somerville). Though Shel and Ben are brothers, their disparate personal and political beliefs have caused them to clash on more than a couple of occasions. When Shel discovers that the governor is preparing a searing speech against gay marriage, his decision to go on strike for equal rights sends his brother's big day into an unexpected tailspin. Incredibly, Shel's protest gains nationwide support and Ben is forced to hire a tacky, run of the mill wedding planner who doesn't appear prepared to organize such a big event in such a short amount of time.

There are no critic reviews yet for Wedding Wars. Keep checking Rotten Tomatoes for updates!

The handsome doctors from ER and Greys Anatomy get together for a TV film about gay rights for marriage. Need I need to say more?