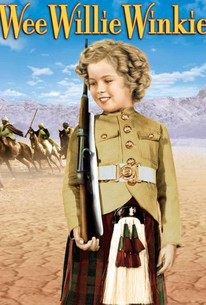 In this lovely John Ford film, Joyce Williams (June Lang) and her young daughter, Priscilla (Shirley Temple), travel to India to live on a British Army base with Joyce's father, Colonel Williams, Aubrey C. Smith). Once there, sweet, young Priscilla manages to win the love and affection of the soldiers and her curmudgeonly grandfather, and she plays an important role in easing a local rebellion. One of the best Shirley Temple movies, Ford allows her to be sweet without being cloying and moves the action at a good pace. A wonderful cast of some of Hollywood's best supporting actors add charm to this film which is appealing to both children and adults.

Doesn't ask for much investment and doesn't repay close engagement. Insofar as it meets that goal without seeming stupid or cloying, it's a smashing success.

This movie follows the typical "Shirley Temple movie" script and underlying themes. It was enjoyable, but not very distinct.