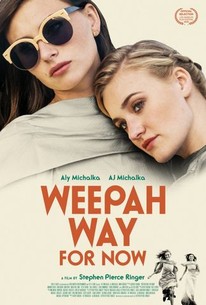 Witty banter abounds between two early 20-something sisters who tease each other almost as much as they need each other. Elle and Joy spend their last week before their next music tour wandering through the heart of Laurel Canyon, whiling away carefree afternoons with their friends as they plan for their own going away party. Real-life sisters Aly and AJ Michalka show off their musical talents and unapologetically neurotic and wry sense of humor. In his directorial debut, Stephen Ringer reveals a clear affection for the film's starlets, capturing quotidian hilarities while keeping real the depths of a powerful bond between sisters.

Mimi Rogers
as Lynn
View All

An insubstantial drama which never really finds its raison d'être.

Weepah... skims off the most perfect level of real life, the moments when reality seems most movie-like.

There are no featured reviews for Weepah Way for Now at this time.