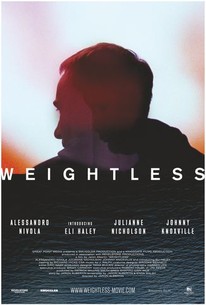 Alessandro Nivola, Julianne Nicholson, and Johnny Knoxville star in this haunting drama of a man, living on the margins of society, who suddenly finds himself responsible for a ten year-old son whom he hasn't seen since infancy. An alienated loner who can barely take care of himself, he struggles to forge a relationship with this lonely, at-risk child. Canadian director Jaron Albertin is a celebrated talent in the video and commercial world. In 2015, year he won the most prestigious award for advertising, the Palm d'Or at Cannes for his directorial work on Under Armour'sI Will What I Want campaign with Gisele Bündchen. His other numerous accolades include a Bronze Cannes Lion and additional Cannes Lion Shortlist, a prestigious D&AD Yellow Pencil (and additional Pencil nomination), Gold and Bronze Clio Awards, an AICP Award, and the PLUG Award for Music Video of the Year. Weightless, co-written by BAFTA and Tony winning writer/playwright Enda Walsh (Once, Hunger) is his feature film directorial debut.

Eli Haley
as Will

Eli Haley Haley
as Will

Annie Yokom
as Natalie
View All

You’re a Fresh One, Mr. Grinch… For Now

Despite the emotional terra firma Nivola and other cast members try to provide, this drama about a taciturn loner forced into single-parenthood drifts into the ozone.

There's a sense of beauty and contemplation in Albertin's work, and though it seems like danger hangs in the air, there's an odd lack of tension or suspense, and the film's pace requires incredible patience.

Though hardly a failure, the serious-minded film is less affecting than it might've been, relying sometimes on hints that are needlessly ambiguous and on symbols that don't quite click.

Here, deeply damaged people are prone to exasperating decisions. Yet these characters are so strikingly realized that you can't help but care for them.

The nicest thing that can be said about this demure little Canadian trifle is that it's a film that finally gives the gifted, self-assured and sadly underrated Alessandro Nivola a leading role.

A stylistically assured piece of work.

When both of your leads are so stone-faced and largely uncommunicative, it's difficult to care enough to want to know where they or their relationship end up.

I found the entire emotional journey on which Weightless takes viewers to be rewarding as well as heartbreaking.

Despite some strong performances and some haunting imagery, it's difficult to establish a sufficient emotional connection with characters who are this internalized and withdrawn.

Weightless marks an impressive debut feature defying convention to recount a pessimistic story about two misfits coming together too little, too late.

Still, while his first feature may be gorgeous, the characters in this rural family drama prove so amorphous that their struggles engender detachment instead of empathy.

There are no featured audience reviews yet. Click the link below to see what others say about Weightless!