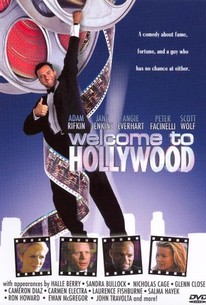 Film director Adam Rifkin spoofs Hollywood's star machine in concocting this fictional "mockumentary" about a director (Rifkin playing himself) who wants to make a documentary film about a rising young star. Anton Markwell (Tony Markes, who co-directed the film) is the object of Rifkin's inquiring camera. Rifkin, fancying himself a star-maker, advises Markwell to change his name to Nick Decker. Decker is actually the second choice for the project. Rifkin originally selects David Lake (David Andriole), but Lake signs a film contract and his studio won't cooperate with Rifkin's documentary. Rifkin has no better luck with Decker, until his protégé lands a guest role on the popular television series Baywatch. But while filming on the set, Decker steps on a sting ray and ends up in the hospital, ending his chance for quick notoriety. Meanwhile, Lake continues to beat out Decker for plum roles.

Adam Rifkin
as Himself

Angie Everhart
as Herself

Nicolas Cage
as Himself

John Travolta
as Himself

David Hasselhoff
as Himself

Ron Shelton
as Himself

Laurence Fishburne
as Himself

Will Smith
as Himself

Cuba Gooding Jr.
as Himself

Jada Pinkett Smith
as Herself

Sandra Bullock
as Herself
View All

Critic Reviews for Welcome to Hollywood

You'll gasp and you'll laugh...and will probably be adding some Ozploitation to your Netflix queue.

It gets silly towards the end, but it's a fun ride

There are no featured reviews for Welcome to Hollywood at this time.