Welcome to the Jungle2014 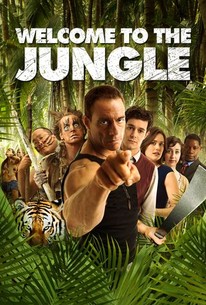 Welcome to the Jungle Photos

A group of unsuspecting office workers find themselves stranded on a desert island when a corporate retreat led by unhinged former Marine Storm Rothchild (Jean-Claude Van Damme) goes horribly wrong. Now Chris (Adam Brody) and his co-workers must battle nature -- and each other -- to survive! Welcome to the Jungle is a hilarious journey into the heart of madness also featuring Rob Huebel, Kristen Schaal, Dennis Haysbert, and Megan Boone.

Critic Reviews for Welcome to the Jungle

Director Rob Meltzer, who made the kind-of-amusing meta short "I Am Stamos," directs things in shameless, let's-get-this-thing-over-with style ...

No matter what the title says, there is no welcome waiting for you.

This movie's biggest audience will come from Jean-Claude Van Damme's fan base, and boy will they be disappointed.

Van Damme's performance is about the only element left unscathed by the movie's compulsion to point out its own absurdity.

Pushed from the bowels of cinema hell.

[Welcome to the Jungle] is smart enough to make the connection between petty boardroom oneupmanship and action-movie tropes, and deft enough to ridicule them both for their panicked performance of testosterone.

The basics are covered acceptably, making it an ideal rental for a lonely Saturday night or for Van Damme addicts looking to see their favorite splits-master make a funny or two with surprising skill.

Welcome To The Jungle strands audiences on a deserted island without food, shelter, or any real form of entertainment - a fate not even action-star-turned-comedian Jean-Claude Van Damme can save us from.

Audience Reviews for Welcome to the Jungle

You know how the other day I was talking about Bruce Willis not actually being that great at strictly comedy. He's fine in action/sci-fi/comedy hybrids like the Die Hard series or The Fifth Element, but he's horrible in strictly comedies where the action is more limited. So color me surprised when Jean Claude Van Damme, inferior as an actor to Bruce Willis in almost every way, is actually better than him at comedy. He found away to adjust his "style" towards something that's a little bit more "outside the box" than the stuff he usually does. The guy legitimately made me laugh a couple of times. Not hearty laughter or anything, but he got more laughs out of me than Bruce Willis did in The Whole Nine Yards. Don't get me wrong, though, while this film was better than I would've ever anticipated, it's still not something that I would say was even remotely good. This is taking into consideration how awful everything prior to the actual retreat was. Boy, it was really rough going at the beginning there. It was probably enough for me, on a day where I was in a real shitty mood, to have stopped watching it because it didn't do anything for me. But there's some legitimately inspired bits. Van Damme and Kristen Schaal easily get the best lines in the movie. And the whole idea of Phil becoming a god with his own cult is ridiculously absurd, but it definitely yields some laughs. Problem is, while the film definitely has a decent enough cast, it's mostly relying on the raunch and the cursing in order to make you laugh. And it works to an extent, like when Brenda goes on her tirade about the things she's heard on camp, but not actually saying the curse words, just shortening them like Mf'er and stuff like that. That's probably not that funny of a joke, but Kristen Schaal makes it work. Then, afterwards, when Brenda talks about taking a shit. Again, it probably wouldn't have worked if it was anyone else other than Kristen, but she makes it worth watching and funny. Other than that, though, the film doesn't really do a good job at being consistently funny. It's a very up and down film unfortunately. Which is kind of a shame, because the film could've been truly great once it got to the island for the retreat. Like there was some real potential there for a really crazy story. And there's hints of that here, with the whole cult, orgies, and drugs thing, but it simply doesn't get as crazy as it potentially could've. I wouldn't exactly recommend this movie, but it's definitely gonna "sneak" up on a lot of people. I put that in quotation marks, because it's not like this is a sleeper film. A movie that everyone overlooked but is actually great. This is not that, clearly. But it's better than it had any right to be. Van Damme does a surprisingly good job here, as well. You could, honestly, find much worse films to watch than this. You could also find BETTER films to watch than this, but this didn't make me pull my hair out, so that's a positive.

The first great comedy I've seen so far in 2014. An absolutely hilarious and wildly entertaining comedy adventure. An outrageous, smart and terrifically enjoyable movie. Jean-Claude Van Damme steals the show, he gives an outrageously funny performance. One of the true kings of action proves he is the king of comedy with great energy and humor. Adam Brody and Megan Boone are terrific. It's total non-stop fun for everyone. With a film like this there is no seriousness it's just you sitting in your seat and enjoying yourself for ninety five minutes.

Unleash your inner beast! Good comedy! The thing is, going into this movie and letting yourself be entertained, its a huge success with funny side characters, plays on other movies and books that make you say aha yeah! It does not get to that stupidity point where you might think such a comedy could fall into, and it keeps things clever, while still entertaining greatly in a plot which has all the common points and you can predict where its going to go. Although you may see the underlying basics, you are nevertheless entertained and laughing in your seat. So if you like Lord of the Flies with a bunch of office workers and add some humor in to it, you going like this. A group of unsuspecting office workers find themselves stranded on a desert island when a corporate retreat led by unhinged former Marine Storm Rothchild (Jean-Claude Van Damme) goes horribly wrong. Now Chris (Adam Brody) and his co-workers must battle nature -- and each other -- to survive! Welcome to the Jungle is a hilarious journey into the heart of madness also featuring Rob Huebel, Kristen Schaal, Dennis Haysbert, and Megan Boone.

Well here it is, the long awaited comedy starring both JCVD and his son Kris Van Varenberg, can you feel it?. The plot is all about a group of office workers who are taken on a weekend island survival course to boost their leadership and teamwork skills, a wilderness seminar. The group are lead by a tough military expert in the form of...you guessed it JCVD. Low and behold things go tits up and the group must fend for themselves for real. I kinda got an 'Office Space' vibe from this film within the first 20 minutes or so (that vibe quickly died though), the group of characters that we see are a typical bunch of desk jockeys, suits and the obligatory one or two hot females. Unfortunately we only get to know a few of these characters throughout the film, most are just background fodder and some just pop up outta nowhere as far as I could see. Not good considering its all about a group of people trapped on an island, you'd think we would have to know them all so we could get behind the story, problem is there are too many really, around 20. Straight away the film has gaping plot holes, where exactly in the US do these people live and work?. They hop on this cargo plane and take what seems like a half hour flight and like magic they arrive on some uninhabited tropical island!. Then for some unknown reason the pilot dies? yet this never really causes any concern for anyone accept for the fact they appear to be trapped on the island. On and this island also has wild tigers on it? well one, maybe that was for the comedy element but sheesh come on!. Most of the film is a Lord of the Flies style romp as half the group go crazy on the hallucinogenic drugs that the slimy backstabbing office team leader spikes the coffee with. He then proclaims himself God of the island, the alpha male of his alpha male tribe, and basically eats drinks sleeps and has orgies all night whilst keeping his tribe in order with an iron fist...of comedy...of sorts. The other few office workers led by the weak skinny office nerd, try to find a way off the island and are basically the boyscouts of the story. You can imagine the kind of 'humorous' dialog your gonna find here, lots of primitive sexist, alpha male orgy based quips. Most tiny giggles come from the drugged up tribe but don't get your hopes up for all out hilarity. The entire cast are complete unknowns to me which isn't a bad thing but none of them are particularly interesting to watch, and none of them are exactly funny either. The only guy that has any sort of decent amusing dialog is the 'baddie' leader Rob Huebel, but its sparse. JCVD only proves he is no good in a comedy (plus he's hardly in it), you could say he's mocking himself but really its just poor humour. His son's only stand out moment is getting a boner watching the two male leaders fight half naked. The film is odd really, its advertised as a comedy, not a dark comedy even, just a comedy, and its not really funny. It has its few moments that make you smile but then it swings wildly into a semi serious state that is just dark, kinda confusing. Admittedly the films plot didn't pan out as I expected it too, I kinda thought it would go a certain way with a twist but no! they actually stick to their guns with the original stupid plot route. That's the films only positive note really, you're not entirely sure which route the plot will go and you're never entirely sure if JCVD's character is actually playing it for real. It could all go only two ways, the whole setup is real, or the whole setup is fake, so small kudos there I guess. Other than that the whole film is a bit of a miss frankly, nothing much happens, its not a good comedy and its not even visually enticing I'm afraid. I think the fact that half the group are drugged up all the time takes away the comedy aspect because they are all acting zombified. It turns the film into a slightly more sinister game rather than a dumb cheeky witty comedy which is what they were aiming for.

Welcome to the Jungle Quotes