Welcome to the Punch2013 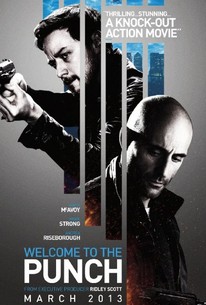 Critics Consensus: Welcome to the Punch is a little deeper and more thoughtful than most police dramas -- but not quite enough to surmount its thinly written characters and numbing violence.

Critics Consensus: Welcome to the Punch is a little deeper and more thoughtful than most police dramas -- but not quite enough to surmount its thinly written characters and numbing violence.

Critic Consensus: Welcome to the Punch is a little deeper and more thoughtful than most police dramas -- but not quite enough to surmount its thinly written characters and numbing violence.

Welcome to the Punch Photos

Former criminal Jacob Sternwood is forced to return to London from his Icelandic hideaway when his son is involved in a heist gone wrong. This gives detective Max Lewinsky one last chance to catch the man he has always been after. As they face off, they start to uncover a deeper conspiracy they both need to solve in order to survive.

News & Interviews for Welcome to the Punch

View All Welcome to the Punch News

Critic Reviews for Welcome to the Punch

As a rule, I love James McAvoy with all my heart, but he just isn't cut out to be a scowling, hardened action hero. Too sweet, too downy, never sufficiently unreconstructed enough. I always want to pet him.

"Welcome to the Punch" is derivative, dumb fun.

One straight-faced gunfight after another, signifying nothing.

Despite its visual polish and fine ensemble, this British police drama is strictly by-the-numbers.

It becomes something of a disquisition on mortality in spite of itself.

Empty, pointless and stupid, the barrage of gunfire called Welcome to the Punch is another unappealing entry in the overworked British gangster genre.

Tense, beautifully shot and great performances from its male leads, Welcome To The Punch is more than your average British cop film and it's an appreciated addition to the genre.

Can't avoid feeling like an appetizer before the real meal.

A cinematic love letter to contemporary London, truly capturing the enchanting nature of the capital at night.

Invariably, Welcome To The Punch succumbs to its revolving murky machinations of cat-and-mouse foreplay that never quite develops into anything percolating or persistent.

Welcome to the Punch is by no means groundbreaking or challenging as a motion picture, but it packs a lot of (pun intended) punch.

It's clear almost immediately that Creevy isn't looking to reinvent the wheel here...

Audience Reviews for Welcome to the Punch

A real knockout of an action movie that delivers some solid fire-power and star-power. It's a stunning, gripping and intelligent action-thriller. It's stylish, compelling and filled with twist and turns that just keep you going right to the very end. A heart-pounding, exhilarating and hard-boiled thrill-ride. It's intensely character-drawn, wonderfully crafted, and tremendously entertaining. The characters have some great moments together, as well as some very gripping moments that just keep you satisfied. It has a Heat element to it. A dynamite action picture and character piece. A fast-paced, razor-sharp and wickedly cool thriller that's packed with explosive action and sizzling suspense. This movie rocks, I loved it for it's story and two magnificent leads, who are just great to watch together. James McAvoy and Mark Strong are sensational, the two of them are just a dynamite team on the screen. They start off as enemies and reluctantly team-up to achieve vengeance and redemption for their characters and uncover the truth. It's in no way a buddy film for these two, but it dose not mean you wont be satisfied with their performances. McAvoy is sharp and thrilling. Strong is magnetic and compelling. Peter Mullan is terrific.

Good vs. bad: mutations of evil and forgiveness Mediocre movie! Whilst the casting was strong, the acting solid and the film itself is shot beautifully, I couldn't help but leave feeling I'd been robbed of a real movie, a real ending. Whilst there are moments when unexpected gunshots will cause you jump a good couple of feet out the chair, there are only so many shoot-outs you can sit through before wondering if anyone even knows how to use a gun. Especially when the people using them are supposedly some of the best marksmen around. So whilst there are tales of corruption, unexplained changes of heart and some shocking, upsetting moments, the storyline becomes relatively predictable too early on for my liking and the film seems to come to a sudden, abrupt end. If you're looking to be entertained for just under a couple of hours without questioning too much, this is the film for you. If like me you expect more from a movie with a cast and the budget shown, prepare to leave the screen feeling as if you've been poked a few times in the arm, hardly punched. Former criminal Jacob Sternwood is forced to return to London from his Icelandic hideaway when his son is involved in a heist gone wrong. This gives detective Max Lewinsky one last chance to catch the man he has always been after. As they face off, they start to uncover a deeper conspiracy they both need to solve in order to survive.

This film marks the start of a trilogy of UK ventures from actor James McAvoy in 2013. It was released practically back to back with Danny Boyle's "Trance" and an adaptation of the Irvine Welsh novel "Filth" will complete McAvoy's year. Let's just say that he hasn't got off the best of starts with this one. During the pursuit of master criminal Jacob Sternwood (Mark Strong), doggedly determined policeman Max Lewinsky (James McAvoy) is shot in the leg which allows Sternwood to escape. Now disgraced within his precinct, Lewinsky believes he will never get the chance bring Sternwood to justice. That is, until Sterenwood is forced out of hiding to return to London from his Icelandic hideaway and hunt down the man responsible for shooting his son. Lewinsky is given the perfect opportunity to rescue his reputation but he also uncovers a deeper conspiracy involved. I've said it countless times before but I'm afraid I'm going to have to say it again; I'm not a massive fan of the action genre. I find it all a bit hollow and the story and logic always suffer for the sake of set-pieces and excitement. This has that very same problem. The reason I went into this was for the actors and the curiosity of how a British made movie, in this genre, could compete in terms with the U.S. At least, on both these accounts, I wasn't disappointed. McAvoy, once again, proves his leading man credentials with fine support by Mark Strong and British character actors like Peter Mullan, David Morrissey and Johnny Harris. The film's, near futuristic, look and gritty feel is also perfectly fitting and for a change, a British action movie handles itself just as well as any other. However, it's ultimately no different from the mind-numbing, generic dross that this genre so often delivers and the plot, as expected, has holes aplenty. In fact, they are so wide, they are actually quite offensive. Despite it trying to play clever and keep it's cards close to it's chest, it's all rather predictable and leaves you with the feeling that you've just wasted your time. Eran Creevy does well in the directing stakes and conducts his action set-pieces with impressive ease but his script has more creeks and holes than his protagonist's dodgy knee. If it wasn't for the committed actors and the neon-infused cinematography by Ed Wild, this would be a complete write-off. With a better script and more respect for the audience this could have been a lot better. Sadly, it has neither of these and carries so much self-indulgence it would be more aptly titled... Welcome to the Paunch. Mark Walker

Welcome to the Punch Quotes