Welcome to the Sticks2008 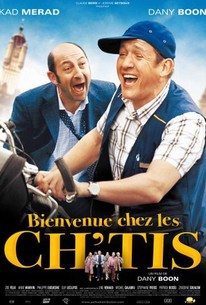 Welcome to the Sticks Photos

Dany Boon wrote, directed and costars in this rousing rural comedy about a man born and raised on France's Southern coast who is exiled to the Northern territories. Philippe (Kad Merad) helps run a small-town post office in France. His wife Julie has been down in the dumps, so he hatches a plan to move to the Cote d'Azur. But Philippe fails to secure a transfer and is relocated to Bergues, a village in Northern France where the language is unfamiliar and the culture is strangely foreign.

Patrick Bosso
as Policeman 'A7'

Eric Bleuzé
as Man on Moped

Critic Reviews for Welcome to the Sticks

There's nothing revolutionary or artistically groundbreaking here, but there's something reassuring in the fact that this is what the French have anointed as their biggest hit. Vive la (low-key) différence.

[Dany] Boon tinkers with the formula just enough to make his story fresh and the sentiment at its heart not too sweet, though compounded contrivances in the last 30 minutes of the picture threaten to unravel its peculiar magic.

Boon thinks it funny to leave the boom in shot all the time. It isn't. Indeed, little in this drivel is funny.

Like any fish out of water story, the fun lies in the details, and to its credit, Welcome to the Sticks supplies them with polish.

Welcome to the Sticks is the most successful movie ever released in France, possibly because self-deprecating humour is so rare there.

In this comedy about misconceptions, love and true friendship, Danny Boon gives us an enjoyable lesson in avoiding making assumptions about people

Thoroughly enjoyable and contagiously funny, this is solid French gold

A winner. Puts its tale of a southern postal worker hoping for a transfer to the Côte d'Azur through the very effective reverse psychology wringer when he ends up in the dreaded north instead - but discovers he loves it.

Audience Reviews for Welcome to the Sticks

Bienvenue Chez Les Ch'tis. Simply formulaic, but charmingly funny. I'll start out by saying that I've lived in Belgium my whole life, and I speak French. Coming from that point of view, this film was hilarious. I loved that it begins pouring rain the second he enters into the territory of "Le Nord" (been there), and the constant use of the term "Biloute" (done that). The performances are nice, especially Dany Boon, who did a great job of directing and writing as well. The story was nothing amazing, but because of the charming characters and my own love for anti-Northern France jokes, it succeeds greatly. Why 70%? Because you get plenty of clever laughs along with a likable, the situations are fun and its tight pace keeps things moving nicely. Extra: The English subtitles don't do the Ch'tis accents justice, they're hilarious. A lot of French humor revolves around wordplay and double-meanings, and this movie has plenty of those. Have you seen this dubbed? Is it any good? Well anyways, several very French/Belgian moments.

Charming, at times downright hilarious comedy. Unfortunately I don't speak a word of French and have no deeper knowledge of the culture clash between North and South - the film is probably truly funny to French audiences, as the success in France also demonstrates.

Slight, but amusing film. The parts where the wife goes to visit are hilarious, and I give full marks to whoever did the translating for the subtitltes!

It is hilarious, but in a French way. I certainly enjoyed it...

Welcome to the Sticks Quotes