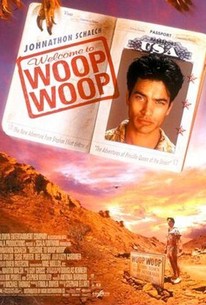 In part, filmmaker Stephan Elliott (best known for The Adventures of Priscilla Queen of the Desert) made this black, surrealistic and subversive comedy to bid farewell to Australian cultural traditions (i.e. excessive beer drinking, racism and sexism) that are rapidly disappearing due to the increasing infiltration of urban sophistication and political correctness into even the county's most remote regions. Unfortunately, Elliot's outrageous tribute to past 'traditions' is presented with such vulgar abandon that many Australians are sure to be offended, not tickled, even though Elliot did try to tone down the mean spirit of the original script which was first titled 'Big Red.' The story centers on Teddy, a fugitive con-artist who has fled New York and gone into the Australian outback. His troubles begin when he is picked up at a lonely gas station by the blonde and brassy Angie who quickly seduces him and then knocks him out cold. Teddy awakens to find himself in the dusty town of Woop Woop. Surrounded by steep cliffs, the town, which was built near a now-defunct asbestos mine, is ruled by Angie's father Daddy-O, who is as much a warden as he is a local leader, deciding when and who will enter and leave Woop Woop. A weird place that is supported by a kangaroo-meat dog-food factory, it is populated by beer-swilling rednecks, crude eccentrics (and a giant kangaroo named Big Red) who find endless entertainment listening to Oscar & Hammerstein musicals (the town's ramshackle drive-in runs The Sound of Music and South Pacific continuously). Teddy quickly discovers that he is in effect the burg's newest prisoner and is expected to constantly service the sexually insatiable Angie. Not willing to remain a captive, Teddy begins planning his escape. The story's surrealism comes from Elliot's deliberately inappropriate use of musical numbers to punctuate events.

Tina Louise
as Bella
View All

I love Welcome to Woop Woop for its mania and madness, for Elliott's unbridled direction and decision making. For the manner that Jonathan Schaech, Susie Porter, and Rod Taylor, thrust themselves with vigour into their roles.

Sure - it's dark and admittedly daft, but somewhere beneath its damaging depiction of the detritus of contemporary Australian culture lies a harsh historicality; an indubitable landscape, unpleasant and unforgiving.

Elliott's attempts at killer entertainment only result in the actors making utter fools of themselves and complete exhaustion on the part of the audience.

I'm Australian, and I loathe this cliched crap!

Finally a Rocky Horror Show to greet the millennium. Welcome to Woop Woop is indisputably the best "bad" film to hit our screens in many a moon.

Has to be seen to be believed, but I don't recommend it.

I love crazy Australian movies. And this one is definately CRAZY!