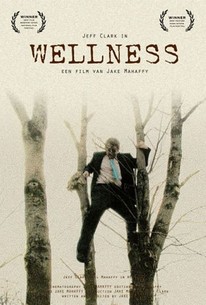 Independent filmmaker Jeff Mahaffy chronicles a few days in the life of a man whose life is beginning to fall apart in this cinema verite-influenced drama. Thomas Lindsey (Jeff Clark) is a middle-aged salesman who collects abandoned insect nests when he isn't on the road trying to drum up sales. Lindsey has dumped most of his life's savings into a new product called Wellness, a health supplement that claims to cure nearly all physical and emotional ailments. Wellness is being marketed like a pyramid scheme, and Lindsey's overseer is Paul Stubbs (Paul Mahaffy), who bullies his charges into bigger sales and treats Lindsey with barely disguised contempt. As Lindsey desperately tries to convince people to buy into the new wonder drug, Stubbs begins scaring away the few customers he can attract as Lindsey finds himself on the verge of financial ruin. Wellness was an official entry at the 2008 Rotterdam International Film Festival. ~ Mark Deming, Rovi

There are no critic reviews yet for Wellness. Keep checking Rotten Tomatoes for updates!

There are no featured reviews for Wellness at this time.