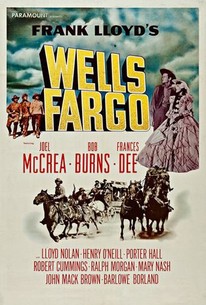 The third of Paramount's "deluxe" westerns of the 1930s (following The Texas Rangers and The Plainsman) was Wells Fargo, filmed on a Cecil B. DeMille scale by producer-director Frank Lloyd. In his first western appearance, Joel McCrea plays Ramsey McCay, troubleshooter for the newly formed partnership of Henry Wells (Henry O'Neill) and William Fargo (Jack Clark). Dedicated to maintaining a safe and speedy overland mail and freight service to the West, Wells-Fargo is at the forefront of several important historical events, including the California Gold Rush, the formation of the Pony Express and the Civil War. Hero McCay is briefly separated from his wife Justine (played by McCrea's real-life spouse Frances Dee) during the last-named conflict, but the two are reunited late in life as Wells-Fargo celebrates its 20th year of service. Constructed in a rather pedantic "tableau" fashion (a frequent shortcoming in Frank Lloyd's films), Wells Fargo nevertheless contains several thrill-packed highlights, most of which would do service as stock footage in such later Paramount westerns as Geronimo. Originally released at 115 minutes, Wells Fargo was radically shortened in subsequent re-issues, almost completely eliminating the semi-villainous character played by fourth-billed Lloyd Nolan (if asked, audiences would probably have preferred to see far less of comedy-relief Bob "Bazooka" Burns). ~ Hal Erickson, Rovi

Granville Bates
as Bradford the Banker

Harry Davenport
as Ingalls the Banker

Frank Conroy
as Ward the Banker

It's a highly commendable picture, full of sound historical material and pioneering spirit. Unfortunately it is also a little bit dull.

There are no featured reviews for Wells Fargo at this time.