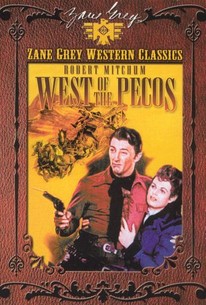 West of the Pecos Photos

Filling in for RKO's Western ace Tim Holt, who was fighting the war in Europe, a young Robert Mitchum starred in this fine version of Zane Grey's 1937 story of a wild and woolly West. Ordered by his doctor to get some exercise, Chicago meatpacking king Col. Lamberth (Thurston Hall) reluctantly travels west to his Texas hacienda accompanied by his headstrong daughter Rill (Barbara Hale) and her Parisian maid Suzanne (Rita Corday). En route, they witness the killing of a stagecoach driver (Bill Williams), a crime blamed on Pecos Smith (Robert Mitchum), but actually committed by a gang headed by Brad Sawtelle (Harry Woods). Rill, who decides to masquerade as a boy after being accosted by a couple of ruffians, convinces her father to hire Pecos and his Irish-Mexican sidekick Chito Rafferty (Richard Martin). Naturally, Pecos discovers Rill's true gender after a few dicey moments and they fall in love. But the threat from Sawtelle and his gang is ever present and soon the Lamberth hacienda is engaged in an all-out war.

Critic Reviews for West of the Pecos

There are no critic reviews yet for West of the Pecos. Keep checking Rotten Tomatoes for updates!

There are no featured reviews for West of the Pecos at this time.

West of the Pecos Quotes