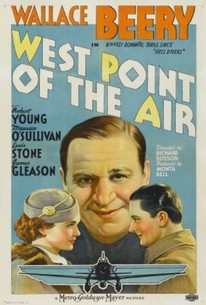 West Point of the Air Photos

Big Mike (Wallace Beery) is a tough Army flyer who longs to see his son Little Mike (Robert Young) take to the air like himself. Little Mike's excessive attraction to Dare (Rosalind Russell) strains his relationship with his father, but eventually he finds the right woman -- Skip (Maureen O'Sullivan), the daughter of Army commandant General Carter (Lewis Stone) -- and an airborne Little Mike does his father proud. Bit-Part Alert: Watch for the brief appearance of then up-and-coming MGM contract player Robert Taylor as Jaskerelli. ~ Nicole Gagne, Rovi

Ronnie Cosbey
as Little Mike as a Boy

Bobby Caldwell
as Phil as a Boy

Marilyn Spinner
as Skip as a Girl

Critic Reviews for West Point of the Air

The adventures have a rather arbitrary flavour, but they are thoroughly exciting, and there is some graphic photography of air accidents and air manoeuvres.

There are no featured reviews for West Point of the Air at this time.

West Point of the Air Quotes