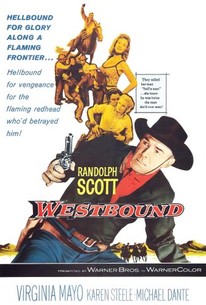 A fast-paced western with a romantic twist, this was one of the last films pairing director Budd Boetticher and popular cowboy hero Randolph Scott before Scott's retirement. John Hayes (Scott) left the Civil War behind him when he took on the job of managing the Overland Stage Lines out of a small Colorado town. Clay Putnam has not forgotten that the Confederacy lost and he plans on robbing Hayes' Overland Stage of one of its gold shipments from California to the North. He wants the gold to stay in the South to revive the Confederate cause. Meanwhile, his wife Norma (Virginia Mayo) complicates matters since she was Hayes' old flame, and Putnam's cronies want the gold for themselves.

May Boss
as (uncredited)

William A. Green
as (uncredited)

Fred Stromsoe
as (uncredited)
View All

Westbound feels slightly different from the other entries, probably due to the absence of producer Harry Joe Brown and screenwriter Burt Kennedy, but it still has some extraordinary passages.

The programmer is saddled with a slight story, but Boetticher magically raises the film above average.

There are no featured reviews for Westbound at this time.