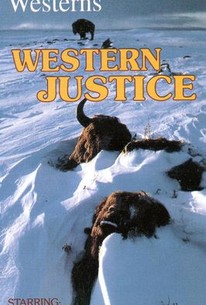 Released in the wake of the spooky The Big Calibre (1935), this Bob Steele Western featured the spectacle of a villain skinned alive as punishment for attempted rape. Scripted by director Robert North Bradbury (Steele's real-life father), Western Justice presented Steele as Ace, an apparent drifter coming to the aid of Rufe (Perry Murdock), who has been falsely accused of robbery. Searching for clues that will clear Rufe, Ace finds himself playing poker in a deserted cabin with Pancho Lopez (Julian Rivero, whose daughter died after being attacked by Clem Slade, the real robber, and the sheriff (Lafe McKee). The three of them agree to prospect together at Red Ford, AZ, where they find the community in the midst of a water dispute with nasty businessman John Brent (Jack Cowell). The latter's chief henchman proves to be none other than the wanted Clem Slade (Arthur Loft). Recognizing his daughter's betrayer, Pancho kills him in the gang's mountain hideout by skinning him alive. Ace, who reveals himself to be a lawman, captures Brent in an ambush and restores the town's water supply by dynamiting the mountain.

Earl Dwire
as doctor
View All

There are no critic reviews yet for Western Justice. Keep checking Rotten Tomatoes for updates!

There are no featured reviews for Western Justice at this time.