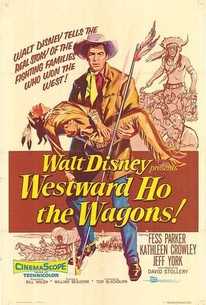 Disney's Westward Ho, the Wagons is a leisurely paced western which seems more like a collection of anecdotes than a unified whole. Fess "Davy Crockett" Parker stars as head wagon scout Doc Grayson, who shepherds a group of travellers through hostile Indian territory. Preferring to use brains rather than bullets, Grayson is able to ward off an Indian attack through a clever--if costly--diversion. A later crisis is averted when Doc, an amateur physician (hence his nickname), saves the life of a seriously injured chief's son. The action highlights are superbly staged by Yakima Canutt, though not quite as exciting as they should be. Kathleen Crowley costars as Doc's erstwhile sweetheart Laura, while George Reeves, his face obscured by a full beard, makes an effective break from his Superman image as wagon leader James Stephen. The fact that Westward Ho, the Wagons featuerd several of Disney's Mouseketeers (Karen Pendleton, Cubby O'Brien, Doreen Tracy, Tommy Cole) in the supporting cast was plugged to death on TV's Mickey Mouse Club, as was the film's hit song "Wringle, Wrangle".

Iron Eyes Cody
as Many Stars

There are no critic reviews yet for Westward Ho the Wagons!. Keep checking Rotten Tomatoes for updates!

There are no featured audience reviews yet. Click the link below to see what others say about Westward Ho the Wagons!!