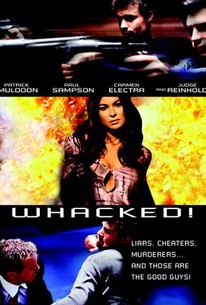 Adopted brothers Mark and Tony grew up in one of the roughest neighborhoods in New Jersey and learned the rules of the street early in life. As they grew into adulthood, one became a hired killer for the mob and the other a top assassin for the CIA. When the duo learns of a scheme to embezzle millions of dollars from the government, they must protect a cyber witness from a never-ending stream of relentless hit squads and determined killers. Though their mission seems impossible, a little help from an old friend and a local mob boss may help the brothers cheat death and expose the criminals in the process.

Johnny Martin
as Jimmy the Bouncer

Johnny Williams
as Carlo
View All

There are no critic reviews yet for Whacked!. Keep checking Rotten Tomatoes for updates!

There are no featured reviews for Whacked! at this time.