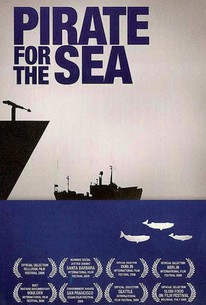 Paul Watson is an environmental activist whose commitment to the cause is powerfully strong -- too strong for some people. Watson was one of the founders of the Canadian branch of Greenpeace, but he was forced out of the group by members who felt his tactics were too harsh -- he's been known to attack ships hunting for endangered species, and will resort to violence against fishermen and poachers if need be. Watson has since formed the Sea Shepherd Conservation Society and travels the world in his ship (which flies a Jolly Roger), challenging those who would bring harm to the ocean and the creatures that live in it. Is Watson a hero taking bold action where it's required, or a borderline terrorist who gives the environmental movement a bad name? Director Ron Colby offers a compelling warts-and-all portrait of a true maverick of environmental activism in the documentary PIRATE FOR THE SEA, which was an official selection at the 2009 Seattle International Film Festival.

Critic Reviews for Whale Warrior: The Pirate for the Sea

There are no critic reviews yet for Whale Warrior: The Pirate for the Sea. Keep checking Rotten Tomatoes for updates!

There are no featured reviews for Whale Warrior: The Pirate for the Sea at this time.

Whale Warrior: The Pirate for the Sea Quotes