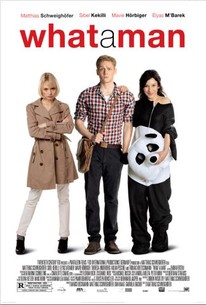 What A Man Photos

This is a spirited and sweet romantic comedy about one man's attempt to prove his manhood to the woman in his life. The film tells the story of Alex, a 30 year-old schoolteacher whose live-in girlfriend dumps him for a manlier man. The breakup forces him on a hilarious journey of self-discovery to prove his masculinity. (c) Paladin

Critic Reviews for What A Man

With its stock characters and low-expectation high jinks, the German import "What a Man" could have been fabricated on the Hollywood rom-com assembly line.

It may hit all-too-familiar notes, but its sureness of tone makes Mr. Schweighöfer a talent to watch.

Notwithstanding its slavish adherence to familiar genre conventions, the film nonetheless makes for reasonably fun viewing, thanks to its off-kilter humor and the chemistry exhibited by Scheweighofer and Kekilli.

Mostly harmless but also irksome in its bland simplicity ...

An unlikely and generally winning if utterly formulaic blend of male fretfulness and romantic bloom rooted in friendship... but in German!

Audience Reviews for What A Man

If you ever wanted to know if there are any differences between American romantic comedies and German romantic comedies, then this film be a very poor choice, because it's exactly as cliched, as predictable, and as contrived as its American counterparts. It's also surprisingly unfunny. You'd see some of these films where the comedy isn't particularly good but you'd know that they were at least trying to make you laugh. With a few exceptions, this film doesn't really even try. And when it does try, it doesn't really work anyway. I suppose the film thinks it's probably funnier and cleverer than it truly is and perhaps that's why it thinks that it doesn't really need to try and it can get away with not being particularly funny, interesting, or insightful. The one thing the movie does have, outside of Matthias Schweighöfer's inherent likability, is the fact that it does a good job at sort of tying its two main characters together and make it a lifelong story about their "love", as cheesy as it sounds, rather than just focusing on a relationship between two people that met each other for the first time after the film starts. So that sort of "long-term" build up to them actually getting together certainly had its sweet moments and moments that wouldn't have been there otherwise. This just isn't a film that does anything to stand out of the pack. It's more concerned with appealing to a broad audience than it is concerned in making sure the script is tightened up, the characters are more interesting, and the film is actually funny. Focus on what's really important rather than making a half-assed attempt at a predictable Hollywood rom-com. We already have thousands of those here and the ones that really stand the test of time are those that manage to subvert all the cliches and the expectations to create something that's truly unique. This, however, is not one of those films. It's below average at best with few redeeming qualities.

What A Man Quotes