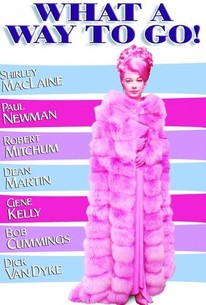 What a Way to Go! Photos

This lavishly produced, big-budget comedy (it cost $20 million in 1964 dollars) stars Shirley MacLaine as Louisa, a widow who is worth $200 million dollars. However, she's convinced that her fortune is cursed, and she wants to give all her money to the IRS. As she explains her sad tale to her psychiatrist, Dr. Stephanson (Robert Cummings), it seems that when Louisa was young she had the choice of marrying rich playboy Leonard Crawley (Dean Martin) or poor but decent Edgar Hopper (Dick Van Dyke). She chose Edgar, but soon he became obsessed with providing a fine home and fortune for her; he got rich but worked himself to death in the process. Despondent, Louisa flies to Paris, where she strikes up a romance with expatriate artist Larry Flint (Paul Newman). When Larry invents a machine that creates paintings based on sounds, he becomes wealthy and famous -- and dies. Louisa returns to America, where she figures to break her streak by marrying Rod (Robert Mitchum), a business tycoon who already has lots of money. He resolves to take life easier and becomes a farmer, only to die in a strange accident with a bull. Louisa is drowning her sorrows one night at a sleazy night spot when she falls for second rate entertainer Jerry (Gene Kelly). They marry, and a now-wealthy Jerry develops a relaxed, carefree quality to his act that makes him a huge star, which leads to his being crushed by a mob of his biggest fans. What a Way to Go! boasted a screenplay by Betty Comdon and Adolph Green that featured many amusing film parodies and a score by Nelson Riddle; it also marked the final screen appearance of comic actress Margaret Dumont, best remembered as Groucho Marx's straight woman in several films. ~ Mark Deming, Rovi

Shirley MacLaine
as Louisa May Foster

Barbara Bouchet
as Girl on Plane

Critic Reviews for What a Way to Go!

Hard to define but easy to recommend; the 20th-Fox presentation is a funny musical comedy, or comedy with music, with all the glamour that Hollywood can throw into one film, and a high-powered cast to light the marquee.

J. Lee Thompson's direction has failed to coalesce a good, firm farce. It lets the whole thing flap wildly -- and that's no way to make a film.

A big, gaudy, gimmicky comedy which continually promises more than it delivers by way of wit and/or bellylaffs.

What a Way to Go is supposed to have cost six million dollars, which averages out to about a million and half a laugh.

[Spells] out each joke for the slow readers and then repeating it for those who can't read at all.

The talents of an incredible group of actors are pooled for this effervescent comedy that was originally conceived as a starring vehicle for Marilyn Monroe.

A star vehicle for Shirley MacLaine, Thompson's film is a tediously episodic black comedy about a wealthy widow and her five husbands; Newman, Mitchum, and Martin are all wasted.

The fact was that it simply wasn't very funny.

An unappealing episodic black comedy that gets stuck in its own silliness.

Audience Reviews for What a Way to Go!

Silly shenanigans with Shirley a daffy delight as she works through a series of husbands and crazy production numbers. Her costumes have to be seen to be believed.

A delightful confection of a movie made primarily to showcase Edith Head's sumptuous outfits. It's really an experience to see all these big stars having a grand old time f-cking each other in a big glass of champagne. A satire of sorts, but the main purpose of seeing this movie is to have FUN, because you're never gonna see anything like this again.

What a Way to Go! Quotes