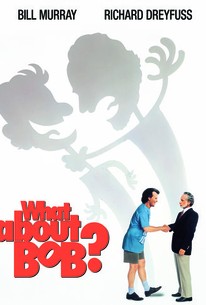 Critics Consensus: Bill Murray and Richard Dreyfuss' chemistry helps make the most of a familiar yet durable premise, elevating What About Bob? into the upper ranks of '90s comedies.

Critics Consensus: Bill Murray and Richard Dreyfuss' chemistry helps make the most of a familiar yet durable premise, elevating What About Bob? into the upper ranks of '90s comedies.

Critic Consensus: Bill Murray and Richard Dreyfuss' chemistry helps make the most of a familiar yet durable premise, elevating What About Bob? into the upper ranks of '90s comedies.

What About Bob? Photos

In this comedy about a doctor-patient relationship pushed way beyond the office, Bill Murray plays Bob Wiley, a neurotic New Yorker struggling with a whirlwind of paralyzing phobias. When an exasperated colleague pawns the handful off on Dr. Leo Marvin (Richard Dreyfuss), the psychologist has no idea his last appointment will follow him north to New Hampshire on a month's vacation. Bob takes to Dr. Marvin's latest book like no therapy before it, so the well-meaning pest tracks Marvin down at his lakeside summer home to further discuss his problems. But Marvin, preparing for an interview on Good Morning America and a few weeks of R and R, views Bob's stalking as highly inappropriate, and demands he return to New York. But Bob can't take even the strongest hint, and sets up camp with a neighbor to indulge in his own "vacation" -- from his problems. Meanwhile, Marvin's son Sigmund (Charlie Korsmo), daughter Anna (Catherine Erbe), and wife Fay (Julie Hagerty) take to Bob's loopy charm, which Marvin views as an irritating threat. Marvin's temperature rises as Bob insinuates his way into the family, helping Sigmund learn to dive and counseling the previously ignored Anna. As Bob's stock continues to rise, and his to plummet, Marvin becomes increasingly unhinged as the minutes tick down to the interview.

Joan Lunden
as Herself
View All

News & Interviews for What About Bob?

View All What About Bob? News

Critic Reviews for What About Bob?

Murray and Dreyfuss play off each other to their maximum advantage: Murray does what he does best, to shine-on and ultimately destroy authority figures, while Dreyfuss' portrayal of the runty doctor is splendidly Napoleonic.

Murray, with his curious blend of pathos and aggressiveness, is terrific, and so is an acutely uptight Dreyfuss, never once copping a plea for our sympathy.

This cruel but effective black comedy violates credibility at almost every turn, but the concept itself is so strong hat it winds up working pretty well anyway.

Bill Murray finds a real showcase for his oft-shackled talent in this manic comedy.

With Dreyfuss and Murray on top form, not even the familiar plotline -- uptight rich person meets free-wheeling poor person and learns about life -- can prevent this lunatic comedy from being funny.

Except for the last half hour, one of the best comedies of the 90's.

What About Bob? is carried, almost single-handedly, by a peak performance by Murray, whose work here is the equal of his turns in Ghostbusters or Caddyshack.

...an affable endeavor that isn't quite the comedy classic one might've anticipated.

Essentially a two-man comedy riff, of the sort we see less and less at the movies.

Its less is more approach makes for a brilliantly constructed plot in which Murray becomes more and more obnoxious and Dreyfuss is gradually driven to distraction by his eccentric little ways.

A modern-day comedy in the grand tradition of the best screwball comedies of the late 1930s and early 40s.

Audience Reviews for What About Bob?

Bill Murray and Richard Dreyfus play off each other so well that I really believed they were those characters. When a man with issues get's assigned a new shrink just as that shrink is about to go on vacation with his family, he follows him all around to make himself better and overcome his phobia's. Due to this, unintentional hilarity ensues for them and I found myself busting a gut every minute. No, "What About Bob?" is not a masterpiece in an regard, but if you look at it as a straight up comedy then you can have a blast with it. Well-written, well-acted, and well-directed, this film is very solid all around, but there was just something about Richard Dreyfus's character that pissed me off. He never really has a full character arch and he becomes more and more of an annoying dick as the film comes to a close, almost to the point of me not caring about his character anymore. Overall, this a very very funny movie that I would highly recommend.

Murray and Dreyfuss are great.

What About Bob? is one of those little comic gems that sort of came and went, and you don't really hear people talking very much about it these days. It was a staple for me when it first came out and I saw it often. There are some hilarious performances from both Bill Murray and Richard Dreyfuss housed inside a very funny story. It's marvelous that they got these two to do a movie together and it turn out so well. The only thing that seems off to me is the supporting cast. I always felt the family was a little off and the angry neighbors should have been given larger comic roles. Regardless, this is one of the funniest films to come from my childhood and I treasure it dearly.

What About Bob? Quotes