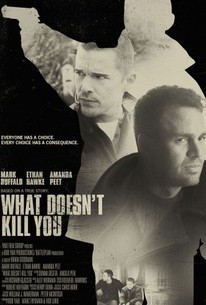 What Doesn't Kill You Photos

Brian and Paulie grow up like brothers on the gritty streets of south Boston. They do whatever it takes to survive, living by the code of their dog-eat-dog neighborhood. Petty crimes and misdemeanors grow into more serious offenses, and eventually, they fall under sway to organized crime boss Pat Kelly. As Brian becomes increasingly lost in a haze of drugs and "jobs," even the love he has for his wife and his children does not seem like it will be enough to redeem him. Meanwhile, Paulie plans "one last heist" but knows it will take both of them to pull it off. How can they escape the only life they know?

Will Lyman
as Sully

Lindsey McKeon
as Nicole
View All

Critic Reviews for What Doesn't Kill You

The overfamiliarity of What Doesn't Kill You is redeemed by a full-scale performance from Mark Ruffalo.

Goodman doesn't allow even a hint of postmodernism or self-consciousness to creep into What Doesn't Kill You, and though the movie's various heists and shootouts are gripping, they aren't especially kinetic or stylish.

I thought that Brian Goodman managed to put us in this hardscrabble South Boston neighborhood.

Nothing really going on here

This is a rare case of a movie that improves dramatically as it goes along.

Kill You, while stewing in the juices of unapologetic formula, is a more of a direct injection of stark criminal behavior punctuated by exhilarating performances and a soulful dedication to the moody rhythms of despair.

The film is caught in the tension between wanting to provide depth of social implication and gunplay action but the symbiosis doesn't multiply the effect.

Been there, seen that-many times-is the best one can say for this wholly predictable autobiographical account of a life in crime.

Audience Reviews for What Doesn't Kill You

"I'm sick of all this nickel and dime bullshit" The Best Supporting Actor nominations in this year's Oscars was arguably the toughest category of any. We had screen legend Robert Duvall in The Judge, a rejuvenated Edward Norton in Birdman, deserved winner J.K. Simmons in Whiplash and Mark Ruffalo and Ethan Hawke for Foxcatcher and Boyhood respectively. But, like me, what you may not have known is the latter two had already shared the screen together in true life crime drama What Doesn't Kill You. Paulie (Ethan Hawke) and Brian (Mark Ruffalo) are a couple of small time hoods who can only muster some small change from their petty crimes. This puts a strain on their personal lives and the bosses they work for so they decide to start aiming higher and branching out on their own. However, like most criminals, the deeper they get the greater the consequences. On the surface this looks like it's just another conventional blue-collar crime drama but on reflection it's much more than that. After it's opening heist scene, we are taken back to the early days and how Paulie and Brian got involved in their errands for local gangsters and the lack of any other opportunity presented to them. Slowly Hawke's character tails off and Ruffalo's afflicted family man takes centre stage and the film becomes more about his personal journey: trying to make ends meet; remaining loyal to his no-hoper friend; kicking his drug and alcohol addictions and supporting his wife and two sons. All the while, he's trying to stay one step ahead of the police and keep himself out of jail. The film works primarily on it's realism. The characters feel real, the South Boston setting feels authentic and it's anchored by Hawke and, especially, Ruffalo's excellent central performances. At one point there's a shooting (I won't say whom) but it's Pop, Pop, Pop.... there's a real sense of panic, helplessness and disorientation that you don't often see in scenes of this nature but I would have liked Goodman to inject a bit more adrenaline into his heist or robbery scenes as occasionally they can feel a little flat and not as exciting as they could've been. However, his focus on the more personal and heartfelt struggle of his characters impresses most and it's a solid directorial debut. Unfortunately, the film wasn't marketed very well and due to the collapse of it's distributor (Yari Film Group) it was released on a very small scale. This largely contributed to it slipping through the cracks. Added to which, some of the film's posters can make it look like a cheap B-movie and the fact that it's title changed a number of times across many countries done it no favours either. It's also know as: Boston Streets, Real Men Cry and Crossing Over. As you can see, the film never really had a chance. This is a real disservice, though, as it's a fine addition to the genre and both Hawke and Ruffalo deliver some of their best work while Goodman (who also co-wrote with Donnie Wahlberg) confidently displays his understanding of this harsh and unforgiving environment. In fairness, you'll have seen many films like it before and it doesn't really bring anything new the table but that's no reason for it to be overlooked. (And it certainly didn't deserve to be buried the way it was). If your a fan of this type of material and the leading actors, then these are reason enough to highly recommend it. Mark Walker

Interesting, and worth while, crime drama about small time thieves in Boston. This is well made, and the acting is very good. A little slow at times, but the overall story is decent. Bottom line: the moral of this story is - crime does not pay.

Cast: Mark Ruffalo, Ethan Hawke, Amanda Peet, Will Lyman, Brian Goodman, Donnie Wahlberg, Angela Featherstone, Edward Lynch, Bates Wilder Director: Brian Goodman Summary: Partners in crime Paulie (Ethan Hawke) and Brian (Mark Ruffalo) find themselves at odds after years of pulling dangerous jobs, surviving turf wars and evading a determined detective (Donnie Wahlberg) in this gritty crime drama set in South Boston. The childhood buddies have gone through the wringer together, but when Brian's relationship with his wife (Amanda Peet) begins to fall apart, their loyal friendship is tested. My Thoughts: "It's a true story that is a bit of a gangster film, but more of a film based on friendship, and a father trying to make the right choices for his family. I really enjoyed Mark Ruffalo and Ethan Hawke together on screen. They were so good together. Very believable as long time besties. I also enjoyed Amanda Peet in this as well. Her screen time with Mark Ruffalo was very emotional and raw. She gave a great performance. It's not a great crime story, but the character's and the performances make up were the story lacks. A good watch on a slow moving night."

What doesn't Kill is the type of film that has been done many times before, and therefore not that original. However, I found the film to be quite entertaining. I always like films like this, even if What Doesn't Kill you is not that original, it's still pretty good. The reason that the film succeeds in my book is because of the superb acting by Mark Ruffalo and Ethan Hawk. Both are great actors and elevate the somwhat overused story to a watchable film. What Doesn't Kill You is based on the life of first time director Brian Goodman's life of crime, and his struggle to go straight. Even though we've seen this type of film before, it feels totally different and at times original. Obviously the film is not for everyone and you may be disappointed. The fact that it's based on a true story is what seperates this from other films dealing with same subject matter. Though the script lacks originality and good structure, and the film relies almost on cliches, the cast involved makes you forget those flaws. I was so engaged by all the actors that I forgot about it's flaws. What Doesn't Kill You may rely on overused material, but it's still a good story nonetheless. I don't understand why this film has gotten so many bad reviews, It definitely isn't the worst film that I've seen. However, this film can only appeal to a certain type of audience. Mark Ruffalo and Ethan Hawk make this film better than it really is. A terrific little film, and one that doesn't deserve all the flack that it received. Theres so many films out there that use the same style of plot, and some of them get Critical acclaim (Avatar copied Dances With Wolves and Fern Gulley) People could have said that Avatar was overusing cliches, but no. What Doesn't Kill You is a good film and its far better than what most people have said about it.

What Doesn't Kill You Quotes