What Happened to Monday2017 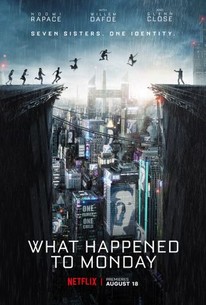 What Happened to Monday Videos

What Happened to Monday Photos

In a not so distant future, where overpopulation and famine have forced governments to undertake a drastic "One Child Policy," seven identical sisters live a hide-and-seek existence pursued by the Child Allocation Bureau. The Bureau, directed by the fierce Nicolette Cayman (Glenn Close), enforces a strict family-planning agenda that the sisters outwit by taking turns assuming the identity of one person: Karen Settman (Noomi Rapace). Taught by their grandfather (Willem Dafoe) who raised and named them - Monday, Tuesday, Wednesday, Thursday, Friday, Saturday and Sunday - each can go outside once a week as their common identity, but are only free to be themselves in the prison of their own apartment. That is until, one day, Monday does not come home...

Critic Reviews for What Happened to Monday

While I thoroughly enjoyed What Happened To Monday, I'm bothered by the film's failure to address a massive plot hole: birth control.

[Bafflingly] [t]he film never once mentions birth control or acknowledges its role in accomplishing the larger society's goal of having fewer babies.

... a crowd-pleasing game of cat-and-mouse, jazzed up by sci-fi flourishes and a high concept.

Wirkola stages a few excellent set pieces and Rapace is fantastic, but the general lack of entertainment value has to be considered disappointing given the potential of the entire piece.

The film isn't as provocative as it means to be, but it gets a lot of juice from Rapace's multifaceted performance and an "anything goes" approach to plot.

What Happened To Monday? has plenty to enjoy, starting with its lead.

It's never boring, but you get a sense that there's a better movie lurking somewhere underneath the surface.

It ends up completely wasting its striking premise to become a vulgar pastime. [Full Review in Spanish]

Noomi Rapace punches above her weight, but a smart premise devolves into an utterly conventional and illogical sci-fi action pic.

The only pleasure in this film is seeing Noomi Rapace interact nimbly with six other versions of herself. [Full Review in Spanish]

Audience Reviews for What Happened to Monday

I thought Noomi Rapace was very good in the Swedish Millennium Trilogy as Lisbeth Salender. In this Netflix release she has a challenge that only a few actors have tackled in movies before, playing multiple (more than two or three) characters. In this near future dystopia she plays seven identical siblings. The writing and action just disappoint as weak copies of other sci-fi thriller genre pictures that explored the concepts here more uniquely.

Tommy Wirkola steps away from his typically fun style of filmmaking for this dark and tragic scifi. But a good director's a good director and despite being maybe a little more predictable than it thinks, not to mention Glenn Close trying her hardest to derail he manages to pull off What Happened to Monday. Extra special props to Noomi Rapace who successfully plays not seven as advertised but EIGHT different characters with virtually no overlap in characterisation.

Remember how China was only allowing one child per family? Well, the same thing goes here only we follow the exploits of one family that broke the law. Noomi Rapace plays seven parts and that's the high point here. She really does quite an excellent job. The sci-fi/dystopian future /political drama parts don't serve as well though as you've seen them all before and done better. Meh.

What Happened to Monday Quotes