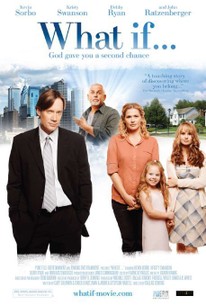 What If tells the story of Ben Walker, who fifteen years ago left his college sweetheart Wendy, and his calling to be a preacher, in order to pursue a business opportunity. Now with a high-paying executive gig, a trophy fiancé, and a new Mercedes, he hasn't considered a family nor felt the need to set foot in a church in fifteen years. But God has other plans. While on a thrill ride outside the city, his new car mysteriously breaks down, and he's visited by a tow truck driver named Mike who claims to be an angel sent to show Ben what his life would look like had he followed his true calling.

John Ratzenberger
as Mike the Angel

Critic Reviews for What If...

I felt affection for the film growing as I watched. It pulled me in with its warmth and its performances.

A much more faith based remake of Brett Ratner's "The Family Man."

An enchanting, provocative, bighearted story that will inspire you to cherish the priceless values of family, faith, love and compassion.

Audience Reviews for What If...

There are no featured audience reviews yet. Click the link below to see what others say about What If...!