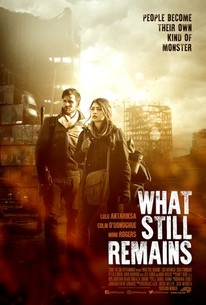 In a world destroyed by disease, Anna is left all alone after the deaths of her family members. She meets Peter, who is also alone and despite increasing her chance of survival, she must decide if she trusts him when he proposes that she stay with him.

Peter O'Brien
as The Prisoner

Makayla Lysiak
as Sarah
View All

Critic Reviews for What Still Remains

A great cast (including vets Mimi Rogers, Dohn Norwood and Jeff Kober) brings Mendoza's ideas to life. The result is a fascinating "what if," imagining society's possible future.

If you're looking for a hidden gem this holiday season, you may have found it.

It doesn't add much to the ever-growing canon of post-apocalyptic movies, so if you've seen as many of them as I have, it's all going to feel familiar.

What Still Remains therefore moves beyond social commentary into the realm of entitlement by divinity.

Less of a post-apocalyptic thriller and more of a character drama answering the implied question of the title. We still remain.

Mendoza maintains an energetic pace, keeping his film riveting from beginning to end.

The fun and mystery of WHAT STILL REMAINS lies in its ability to intrigue us. We're never completely sure how things will unfold, and at a trim 92 minutes, the film doesn't waste dialogue or wear out its welcome.

Josh Mendoza's post-apocalyptic drama What Still Remains taps into the same dystopian elements that helped to heighten the likes of The Hunger Games franchise and The Road.

A comfortable mix of "Book of Eli" and "Doomsday"...

There's a bold attempt here to do something different, and that deserves praise.

Audience Reviews for What Still Remains