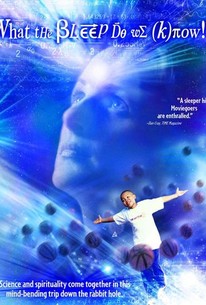 Critics Consensus: Educational, but as entertainment, it'll have viewers asking, 'What the bleep?'

Critics Consensus: Educational, but as entertainment, it'll have viewers asking, 'What the bleep?'

Critic Consensus: Educational, but as entertainment, it'll have viewers asking, 'What the bleep?'

What the Bleep Do We Know!? Photos

Part narrative, part documentary, and part animation, What the #$*! Do We Know?! was filmed with the intent of expressing the neurological processes and so called "quantum uncertainty" of life. With the help of a directorial triumvirate consisting of Betsy Chasse, William Arntz, and Mark Vicente, Marlee Matlin stars as Amanda, whose uninspired daily routine is abruptly altered into a chaotic, Alice in Wonderland-style reality, complete with quirky characters and wildly different perspectives on life. As Amanda falls deeper into the experience, she's forced to drastically reconsider her perceptions of interpersonal relationships, men, and the fundamental principles of life. What the #$*! Do We Know?! is supplemented by a host of mystics and scientists, who are interviewed intermittently throughout the film for their wisdom and knowledge concerning religion, science, the thin line between them, and the consequences of blurring that line. ~ Tracie Cooper, Rovi

Critic Reviews for What the Bleep Do We Know!?

Shot and acted with all the skill of a late-night infomercial.

As an entryway into new ways of thinking about the self, the universe, and the vast infinite whatnot of whatever (you know what we mean, oh wise one), this little movie is big.

The film with the year's most unfortunate title also happens to be a candidate for the year's worst film.

Akin to finding yourself in an argument with a drunken hippie on a Matrix bender.

Sometimes What the #$*! Do We Know!? has the corny, ham-handed feel of an old 16mm educational movie, but I'm not sure how intentional this is.

Though it does influence some spirituality sneakily, and can be pretty ridiculous, it's still a fascinating account of free thinking.

The overall tone is that of an indoctrination film for a cult, if such films were made by the people who make training videos for fast-food franchises.

This documentary will either be a life-changing experience, or it'll drive you nuts with its new-agey tone.

There are two minor problems with What the #$*!: it's bad science and it's a bad movie.

Audience Reviews for What the Bleep Do We Know!?

Don't be fooled by this pseudoscientific garbage that uses misleading information of quantum mechanics to sell some self-help propaganda for a cult without even having the good faith to tell us the identity of its "illustrious" interviewees before the movie is already over.

The theatrical cut of this movie is but a taste. If it stirs your interest, then you must rent/buy the extended version which includes hours of additional footage including interviews, graphical explanations, and dramatic sequences. A nice introductory documentary to the world of quantum physics. Must see for anyone interested in science or philosophy, even if you are familiar with the topics, as the interviewees are fantastic and inject an enthusiastic quality to work as a successful facade for what is essentially a mashed-up (and atypically amusing) lecture.

This film is so cheap and tacky how it expects to discuss it's theories on quantum physics is beyond me. With scenes of sex and some bad language it may seem like this film is aimed at adults. However we are also treated to CGI representation of lust singing Robert Palmers 'Addicted to Love'. This film really is that wank. Represents theories as facts, and ties together some interesting interviews with a fictional sub-plot about some deaf woman which just happens to demonstarte everything being said. This is the same stuff you find in those self-help books but done in a much more patronizing manner. As entertainment it sucks, as a documentary it blows and as an enlightening doorway into a new vast realm of thought...it can fuck off.

appreciate the fact that this movie tries to make the audience think, but the approach is terrible and condescending to say the least. These are not new concepts. These are rehashed efforts to explain the world through juvenile fantasy that pretends that the world is only what we know. This is a child's way of thinking. This is someone who is stuck in the concrete operational stage of development. I agree that reality is perception, but that is on the level of subjective experience. Anyone who has stepped outside of themselves will have encountered this manner of thought before. In addition, again-these are not novel ideas. If you have never quested outside of the conventional realm of thought you might find this interesting. If you have never done any self-study or study in the world of philosophy then this might be an introduction, but it is pedestrian to say the least(sorry to sound pompous), pedantic and misses the mark in its effort to teach (or bludgeon). I might also add that the presentation was terribly annoying with all of the flashing in and out. It was a chore to watch...and not because it makes you think. I might also add that it completely fudges the concepts in Quantum mechanics to meet its message. Check out "Waking Life" or "Mindwalk" if you want to provoke some real thought about life. You will find yourself far more fulfilled.

What the Bleep Do We Know!? Quotes