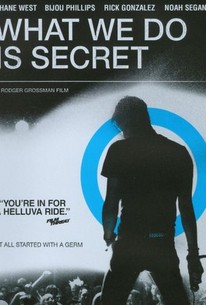 Critics Consensus: Despite its dynamic subject and reckless anti-glamor, this biopic about the legendary punk rocker Darby Crash fails to translate the excitement its subject generated.

Critics Consensus: Despite its dynamic subject and reckless anti-glamor, this biopic about the legendary punk rocker Darby Crash fails to translate the excitement its subject generated.

Critic Consensus: Despite its dynamic subject and reckless anti-glamor, this biopic about the legendary punk rocker Darby Crash fails to translate the excitement its subject generated.

What We Do Is Secret Photos

The true-life story of Darby Crash, who became a Los Angeles punk icon before taking his own life in 1980, provides the background for this gritty musical biopic. Not long after getting kicked out of an experimental high school in Los Angeles, charismatic misfit and major David Bowie fan Jan Paul Beahm (Shane West) announces that he wants to form a rock band. With his best friend Georg Ruthenberg (Rick Gonzalez), Beahm creates a group called the Germs, mainly because their first choice, "Sophistif--k and the Revlon Spam Queens" costs too much to put on a T-shirt. Beahm appoints himself lead singer, Ruthenberg becomes guitarist even though he has no command of the instrument, and Beahm creates new stage names for them -- George becomes Pat Smear, and Jan is now Bobby Pyn. After a few less-than-impressive attempts to putting Beahm's "five-year plan" into action, the Germs begin to click with the addition of sweet but musically inexperienced Lorna Doom (Bijou Phillips) on bass and Arizona transplant Don Bolles (Noah Segan) on drums. Bobby Pyn gives himself another new name, Darby Crash, and the Germs become the talk of the Los Angeles punk scene with their reckless but literate songs and Darby's aggressive performance style. The Germs become big fish in the small pond of L.A. punk, but when hard drugs enter into the picture, Darby begins alienating those closest to him, and after the Germs' collapse, he's at a loss for how to bring his grand scheme to the next level. The real Pat Smear served as a music producer for What We Do Is Secret, recreating the sound of the Germs and other seminal L.A. punk groups for the soundtrack, while the surviving members of the Germs played a series of reunion dates following the production of the movie, with Shane West standing in as lead singer.

Noah Abrams
as Audience Member No.2
View All

News & Interviews for What We Do Is Secret

RT on DVD: Get Smart, Futurama: Bender’s Game and the Obama DVD Controversy

View All What We Do Is Secret News

Critic Reviews for What We Do Is Secret

Despite its thorough attention to historical detail and the obvious love of all involved for their shattered subject, What We Do Is Secret is, in the end, awfully sterile for a movie about the Germs.

While What We Do Is Secret may not be remembered for much more than West's performance, it's an impersonation worth saluting.

The battering live shows prove West's dedication to the role, but as always there's too little insight into both music and musicians and too much period design

Some of the supporting performances, like those of Phillips and Gonzalez, are very strong, but it's West who lifts the entire film to a whole other level.

Despite a terrific performance from Shane West, who bears an uncanny resemblance to Crash, Secret is a chronology, not a biopic.

First-time writer-director Rodger Grossman bangs out a visceral, energized biopic that captures the vibrant idiocy of punked-out youth and a tortured soul gaining his wish of cult status.

"What We Do Is Secret" makes a bid for entering Crash into rock'n'roll mythology.

A docudrama with the production qualities of a made-for-MTV movie about a band that recorded one album and never finished a gig and whose lead singer was a fascist poseur.

In sure hands, What We Do Is Secret could have been a fine rock'n'roll biopic.

West is magnetic trying to fill the gaps in the pop psychology insight into how the Germs' brief candle burned out so fast, with performances, "interviews" and flashbacks.

The final scenes of Secret are its best and, ironically, the original Germs' final moments were said to be their best, too.

Audience Reviews for What We Do Is Secret

For someone who's never even heard of The Germs, I thought it was fairly good.

What We Do Is Secret Quotes