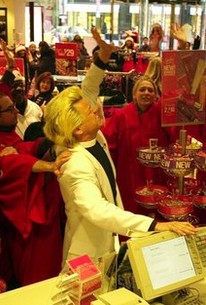 Critics Consensus: WWJB is an eye opening doc about consumerism that manages to be both funny and informative.

Critics Consensus: WWJB is an eye opening doc about consumerism that manages to be both funny and informative.

Critic Consensus: WWJB is an eye opening doc about consumerism that manages to be both funny and informative.

What Would Jesus Buy? Photos

Bill Talen is a New York-based activist and performance artist who since the late '90s has won notoriety for his character Rev. Billy. Rev. Billy is a wildly charismatic street preacher and self-appointed leader of the Church of Stop Shopping, who began his career speaking out against the gentrification of New York City, the forced renovation of 42nd Street, and his favorite symbol of the evils of international marketing, the Disney Store. Since then, Rev. Billy has expanded his targets to include a number of firms (including Starbucks Coffee and several fast food chains) who engage in unfair labor practices and exploit Third World resources for profit; he also performs with a full gospel choir and a four-piece band as they spread the message of overcoming the consumer culture, speaking with your dollars and questioning what advertising and corporate spokespeople have to say. While Talen's routines started out as comic street theater, he's become recognized as an effective (if deliberately eccentric) advocate for economic justice, and filmmaker Rob VanAlkemade offers an in-depth look at the phenomenon of Rev. Billy in his documentary What Would Jesus Buy? Produced in part by Morgan Spurlock, What Would Jesus Buy? received its world premiere at the 2007 South by Southwest Film Festival. ~ Mark Deming, Rovi

News & Interviews for What Would Jesus Buy?

Critical Consensus: Beowulf is Certified Fresh; Magorium Short on Magic; Cholera is Under the Weather

View All What Would Jesus Buy? News

Critic Reviews for What Would Jesus Buy?

The good reverend and his crew do their best to get busted at assorted corporate shrines (Disneyland, the Mall of America), but their media-driven antics serve only to underline Spurlock's add-water-and-stir approach to political documentary.

What Would Jesus Buy? is must-see viewing for anyone who thinks of Christmas as just a mall and its night visitors.

WWJB? encourages viewers to think outside the big box of super stores such as Wal-Mart.

Possibly the feeblest entry yet in the anti-corporate theatre-of-muckraking genre.

What Would Jesus Buy? is paved with good intentions...

It's a wickedly effective indictment of America's consumer compulsion, our mindless shopping and the multinational corporations controlling it all.

In WWJB, we don't really feel like we get to know anyone that well, not even the primary subjects of the film: Billy and his choir.

This funny, yet thought provoking film asks many questions that have plagued consumerism for decades. While much of the ground tracked over is old, it fits perfectly into the modern economic situation.

So we need a better movie about this subject. As usual.

Reverend Billy is a charismatic presence, even if his shtick is too silly and the documentary too unfocused to motivate any serious change in the nation's holiday spending habits.

Seeing WWJB? in a theater is not necessary, although seeing him and the choir hijacking a mall in person would be better than Beowulf in IMAX.

Audience Reviews for What Would Jesus Buy?

I love Morgan Spurlock and Reverend Billy and the Church of Stop Shopping! Think they're doing good work. "What Would Jesus Buy" is a documentary that examines the commercialization of Christmas in America and the negative effects it has on American consumers as well as the sweatshop workers who produce most of these products. Meanwhile, the good reverend and his gospel choir tour the country preaching the gospel of frugality and denounce the worship of products. They of course, get kicked out of or arrested at each place they enter. The reverend has even been banned form ever Starbucks in the country because of his antics. Also in true Spurlock fashion, this film has a comedic twist so that viewers are still entertained while informed. WWJB isn't really an eye-opening documentary if you've already heard about the sweatshops that make shoes and most of the nation's clothing. And perhaps the saddest part of the film is when the choir read what critics have been saying about them. Some of the consumers interviewed even admitted that they didn't care where their products came from or who suffered making them, as long as they got their products. This doc is both hilarious and depressing but well done and worth the watch.

What Would Jesus Buy? Quotes