Whatever Happened to Harold Smith? (2001) 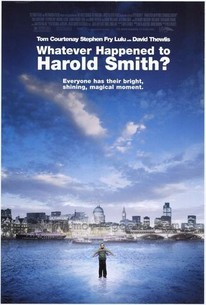 Set during the swinging disco era in decidedly unswinging Sheffield, England, this oddball comedy is both a coming-of-age story about getting funky and a supernatural mystery. Vince (Michael Legge) is a Travolta-obsessed teenager who lives with his aspiring magician brother; his randy mom, who has a taste for young men; and his laid-back father Harold (Tom Courtenay). Vince longs for the young, vivacious Joanna Robinson (Laura Fraser), as Harold wows his family with his unnervingly accurate mind reading tricks. Later, when he makes headlines for inadvertently stopping the pacemakers of a couple of oldsters, Harold learns that he actually does have a telekinetic brain. That doesn't stop him from getting arrested, however, and soon Vince and Joanna's snotty boss (David Thewlis) is representing him in court. Meanwhile, Vince has been unable to summon the courage to ask out Joanna. While walking home one day, he is taken by a sexy young punkette who turns out to be none other than Joanna. Vince promptly dumps his disco stuff and buys a Sex Pistols album. Pete Hewitt, whose previous efforts include Bill and Ted's Bogus Journey, directed this film.

Critic Reviews for Whatever Happened to Harold Smith?

If you're looking for an industrial-strength dose of twinkly twaddle, here's your hypo.

A predictable pudding of a love story surrounded by a lot of over-tweaked, overcooked nonsense.

There are some excellent digs at television's enduring capacity for trivialising serious issues.

This may still sound intriguing, but it's badly executed.

There's just too much going on, too many cliches and too little insight.

Steiner and Hewitt couldn't decide which tale they wanted to tell -- Vince's or Harold's -- and so we get both, each one getting in the way of the other.

There are a number of pleasures along the way.

Goes wildly over-the-top at every turn.

Audience Reviews for Whatever Happened to Harold Smith?

There are no featured audience reviews yet. Click the link below to see what others say about Whatever Happened to Harold Smith?!

Whatever Happened to Harold Smith? Quotes