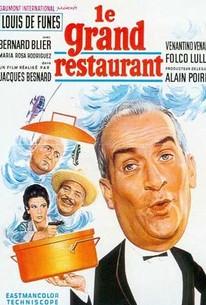 Septime (Louis De Funes) is the owner of a posh French restaurant in Paris who is afraid of his temperamental cooks but who takes his frustrations out on his other employees. When a visiting ambassador is kidnapped from the restaurant, Septime is accused of being an accomplice in the abduction. This sets the scene for some well-staged auto chases over snow-covered mountains. One car flips over but is able to make it down the mountain because skis are attached to the rooftop rack of the vehicle. De Funes adds his own flair of irascible, self-depreciating humor that is the highlight of this comedy spy adventure.

There are no critic reviews yet for What's Cooking in Paris. Keep checking Rotten Tomatoes for updates!

R.I.P Louis de Funès. He was one of the funniest dwarf I enjoyed on TV.

Louis de Funes is good as usual, didn't like the plot on this one though.