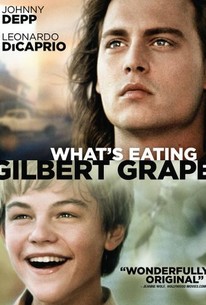 Critics Consensus: It's sentimental and somewhat predictable, but those are small complaints, given the tender atmosphere and moving performances at the heart of What's Eating Gilbert Grape.

Critics Consensus: It's sentimental and somewhat predictable, but those are small complaints, given the tender atmosphere and moving performances at the heart of What's Eating Gilbert Grape.

Critic Consensus: It's sentimental and somewhat predictable, but those are small complaints, given the tender atmosphere and moving performances at the heart of What's Eating Gilbert Grape.

Gilbert has to care for his brother Arnie and his obese mother, which gets in the way when love walks into his life.

Robert B. Hedges
as Reverend

George Haynes
as Dave
View All

A blissful slice of Americana...

Despite Depp's tender melancholy, the performers who stay with you are those who dare to crack the surface of their characters' alienation.

Depp is subtly winning as a man-child oblivious to his own pent-up rage. But the performance that will take your breath away is DiCaprio's.

Even if you have a taste as I do for movies about dysfunctional families, you may be a little put off by the Grapes.

Suggests that the true heroes are those people who day by day must tend to misfits, and do so with love, tenacity and a determination not to go terminally sour in the process.

Hallström's finally struck a chord with the Americans, though it's much the same cocktail of whimsy and worry, the eccentric and the banal, that he's been mixing all along.

Grape makes a lasting impression with its quirky performances and bittersweet themes of hope, humility and perseverance.

Although DiCaprio is the one who ends up getting more attention from the public due to the enormous performance, the movie gives life to a restrained Johnny Depp. [Full Review in Spanish]

Though it takes dark twists and turns to an inevitable climax, What's Eating Gilbert Grape will leave you feeling full and satisfied with a renewed sense of the value in family.

This emphasis on character and texture is full of pleasurable rewards-especially when the astonishing DiCaprio is on-screen-and there's enough growth and compassion to keep it from being a Diane Arbus freak show come to life.

The realistic depiction of marginalized characters overcoming grief and accepting disabilities is what makes this film timeless.

Gilbert Grape has body and deep flavor, but it can be wonderfully dry too.

Interesting and moving film. This was my first Leo DeCaprio film, and I HONESTLY believed that he was a mentally disabled boy they cast in this film. When I snapped that he wasn't, I felt like an ass. But that's how good he was even as a kid.

The film accurately captures the feeling of small town, Middle America, and soars on its emotional story. DiCaprio is absolutely brilliant in his performance. If for nothing else, watch What's Eating Gilbert Grape for him. Ultimately, the film left me with a smile, a credit to how the director was able to draw us in and care about the characters.

A well-acted melodrama concerning a dead-end town and how one of its inhabitants (Johnny Depp) struggles to take care of his family, notably a mentally-challenged younger brother (Leonardo DiCaprio) and a very obese mother (Darlene Cates), who hasn't left the house in seven years. Despite the number of problems this movie has, notably the lack of romantic chemistry between Depp and Juliette Lewis (who is very average in this, which is good for her, I still don't get why she was in a ton of big movies in the 90's), it somehow stays on its feet at the end. The acting is simply sensational, with Depp (his most understated turn yet - and he's phenomenal), DiCaprio (whose facial expressions are just as heartbreaking as how he talks, especially during a key scene towards the end), and Cates (who doesn't go over-the-top at all and plays her emotional cards perfectly) leading the way. The end of the film has a particularly depressing and tear-jerking scene, but it doesn't conclude on a final note such as "The Last Picture Show", the ultimate "dead-end town" film - it has more of an upbeat ending which I for one was happy it went for. Not a great film, but definitely a solid one, and an understandably fine jumpstart to the careers of two incredible actors in Depp and DiCaprio.