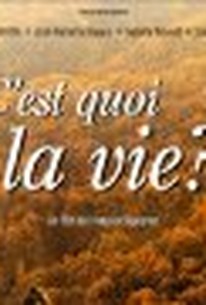 In this drama, three generations of the same family work together on a farm in rural France. Elderly Noel (Jacques Dufilho) takes pride in having worked this land nearly all his life. His son Marc (Jean-Pierre Darroussin) now carries most of the responsibilities of the farm (as well as the debts), and he's starting to buckle under the strain. And Marc's son Nicolas (Eric Caravaca) hasn't decided what to do with his life; he has little interest in farming, but he isn't sure where his real talents lie. One day, after helping his cows give birth to new calves, Marc gets word that he must destroy all his cattle to prevent the spread of Mad Cow Disease. This proves the last straw for Marc, and he commits suicide. Noel doesn't handle his son's death well and ends up in a retirement home, while Marc's wife gets a job as a cashier and Nicolas looks for work (with little success) while searching for a beautiful and mysterious woman to whom he gave a ride. Eventually, Nicolas gets an idea -- with the help of Noel and the rest of his family, he'll reopen a small house on the hillside and support themselves by working the land that adjoins the property. C'est Quoi La Vie? won the Grand Prize at the 1999 San Sebastian Film Festival, while Jacques Dufiho was given the award for Best Actor. ~ Mark Deming, Rovi

There are no critic reviews yet for C'est quoi la vie? (What's Life?). Keep checking Rotten Tomatoes for updates!

There are no featured reviews for C'est quoi la vie? (What's Life?) at this time.