What's the Worst That Could Happen?2001 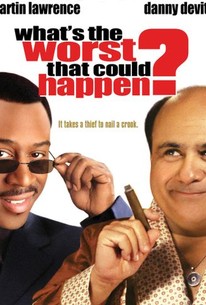 What's the Worst That Could Happen? Photos

The novel of the same name by crime author Donald E. Westlake becomes this MGM comedy starring Martin Lawrence as Kevin Caffery, a thief who breaks into the supposedly unoccupied beachfront mansion of billionaire Max Fairbanks (Danny De Vito). Max unexpectedly catches the burglar red-handed and summons the police, but before the criminal can be carted off, Max impulsively claims that Kevin's lucky ring is his own. Enraged, Kevin vows revenge on the tycoon, and so begins a game of one-upmanship from which neither party will cease and desist, even when the result becomes public scandal, financial ruin, divorce, and criminal proceedings. What's the Worst That Could Happen?co-stars John Leguizamo, Glenne Headley, Larry Miller, Ana Gasteyer, Richard Schiff, William Fichtner, Bernie Mac, and Nora Dunn.

Jay Carney
as Gentleman at Club

Dan Weisman
as Eagle One

Rick Calnan
as Cop at Auction

Kerry Kilbride
as Reporter
View All

Critic Reviews for What's the Worst That Could Happen?

It's worse than the title suggests.

A pinpoint study in what not to do with an adaptation, as well as in why altering a well-known fictional character to suit a poorly cast star is almost always a bad idea.

I'd rather watch a forgotten houseplant dehydrate and die.

This is the kind of do-nothing movie you eventually quit watching on an airplane. Unfortunately, theaters don't supply SkyMall catalogues to take up the slack.

Suffocated by its own plot.

Well...you could waste a few hours of your life. Does that answer the question?

About as funny as Martin Lawrence's heat exhaustion-induced collapse a couple of years ago.

What's the Worst that Could Happen? takes a while to get going, but once it does, it's surprisingly effective, just as long as you appreciate it for what it morphs into - a no-holds-barred wacky comedy.

The most pathetic attempt at comedy in a long time.

It's hard to imagine that a movie with this cast could come up with so few solid laughs.

The film isn't just lightweight, it's weightless. You don't forget it two minutes later; you forget it before it's over.

Audience Reviews for What's the Worst That Could Happen?

Incredibly dumb, What's the Worst That Could Happen? is complete and utter garbage. Danny DeVito and Martin Lawrence star is a crooked businessman and a petty criminal who get into a no-holds-barred grudge match over a lucky ring. The performances are just awful and the plot makes no sense. Most of the jokes fall flat and the characters aren't that likable. What's the Worst That Could Happen? is a horrible film in which nothing works.

The story focuses on a cat and mouse game between a clever thief Kevin (Martin Lawrence), and a crooked business tycoon Max Fairbanks (Danny DeVito), who turn each other's lives upside down after the former is caught burglarizing the Max's house and instead he gets robbed of his most prized possession: his girlfriend's ring. Now, he will stop at nothing to get the ring that was stolen from him. To help him is the hilarious John Leguizamo and joining them is Bernie Mac as Kevin's uncle. William Fichtner is also unforgettable as the police detective who suspects De Vito of committing insurance fraud.

I actually enjoyed it, although there was too many chacthers, the plot was loose, and it wasn't as funny as you'd expect, but I still liked it, Sort of.

This movie was an absolute waste of time to watch. None of it was even slightly humorous, except for William Fichtner's character, which was a unique and very amusing performance. Otherwise the rest is garbage, and shouldn't be watched unless you are extremely bored or morbidly curious.

What's the Worst That Could Happen? Quotes