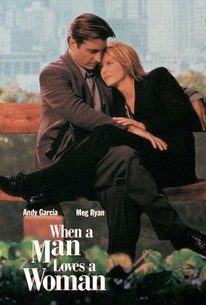 Critics Consensus: When a Man Loves a Woman delves into the complex dynamics of a marriage shadowed by addiction, aided by strong performances from Andy Garcia and Meg Ryan.

Critics Consensus: When a Man Loves a Woman delves into the complex dynamics of a marriage shadowed by addiction, aided by strong performances from Andy Garcia and Meg Ryan.

Critic Consensus: When a Man Loves a Woman delves into the complex dynamics of a marriage shadowed by addiction, aided by strong performances from Andy Garcia and Meg Ryan.

When a Man Loves a Woman Photos

A dramatic treatment of a family torn apart by alcoholism and recovering from it, this was a star vehicle for popular actress Meg Ryan, who plays Alice Green, a school counselor who has a serious drinking problem. Her husband is Michael (Andy Garcia), an airline pilot. Though she's lighthearted and loving, Alice is often reckless and, when drunk, even neglects her children, nine-year-old daughter Jess (Tina Majorino) from a previous marriage, and four-year-old daughter Casey (Mae Whitman), whose father is Michael. After an accident, Alice realizes that she has "hit bottom" and goes into a clinic for rehab. When she returns home, she has kicked her addiction and has become independent and strong, and her perfectionist, controlling husband has trouble adjusting. Michael is used to his wife being weak and helpless, and they end up seeing a marriage counselor to recover from Michael's "co-dependency" on Alice's role as an alcoholic.

Jacques De Groot
as Guy in the Back

Ellen Geer
as Woman at Al-Anon

Critic Reviews for When a Man Loves a Woman

It's a rare film that begins its story in the middle of a relationship, and whose happy ending does not depend on one character's white-hot epiphany and subsequent breathless confession.

Here is a wise and ambitious film about the way alcoholism affects the fabric of a marriage.

Does her husband notice her addiction? How could he not? Does he care? Who knows!

Exceptional tale of a family in crisis; cursing, alcoholism.

There won't be a dry eye in the house. Just sublime.

Salutes the inner work that must be done to keep alive the sacred dimensions of love and commitment.

Audience Reviews for When a Man Loves a Woman

Meg Ryan really freaked me out in a hot-mess kind of way.

not good acting plot was lacking. too slow and to serious.

MegRyan continues to be one of my favourite actresses and this movie is proof why. Andy Garcia also excelled as a loyal husband helping his wife get through her troubles.

Michael and Alice Green (Andy Garcia and Meg Ryan) appear to be the perfect " yuppie" couple. They live in a cozy home and have two lovely young daughters. Theyre passionate about their jobs (hes an airline pilot, shes a junior high guidance counselor) and after five years of marriage, they still look at each other with the sexy adoration of high school sweethearts but Alice has a dirty little secret she drinks....from the moment she gets up.
When her addiction is discovered, she goes into detox, and the movie becomes the story of how her agonizing recovery tears apart a family that was never what it seemed in the first place.

When a Man Loves a Woman Quotes