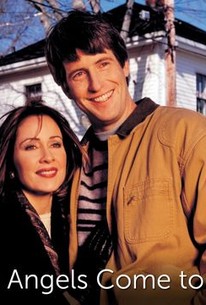 First telecast by CBS on November 28, 2004, When Angels Comes to Town is the third in a series of whimsical TV-movies featuring Peter Falk as an eccentric, all-purpose guardian angel named Max. Sent to a small town in Maine just before the Christmas holidays, Max immediately gets to work on what he thinks is his current assignment: To help Sally Reid (Tammy Blanchard) earn enough money so that she can adopt her orphaned brother Jimmy (Alexander Conti). Unfortunately, it turns out that Max has goofed: Instead of Sally, he was supposed to come to the aid of Karl Hoffman (Seann Gallagher), a misguided young man who is poised to lay off the artisans working at the glass factory run by his Uncle Gregory (Mark Anthony Krupa), an East German refugee. Thus it is that Max's heavenly superior, an attractive angel named Jo (Katey Sagal), descends to earth to untangle the mess. Subsequently, however, both Max and Jo come to realize that the ultimates fates of Sally and Karl are inextricably intertwined. As was the case in the earlier A Town Without Christmas and Finding John Christmas, the cagey Max adopts several disguises in the course of his assignment, at one point showing up in drag!

Critic Reviews for When Angels Come to Town

There are no critic reviews yet for When Angels Come to Town. Keep checking Rotten Tomatoes for updates!

Audience Reviews for When Angels Come to Town

This seems like one of the low budget, made-for-Christmas, sappy TV movies where two angels come to town and fix all the problems in their world.

When Angels Come to Town Quotes