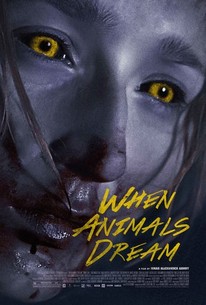 A teenage girl's sexual awakening unleashes something primal within, revealing a dark family secret. On the run and in mortal danger, embracing a century's old curse will be her only way to survive. (C) Radius-TWC

News & Interviews for When Animals Dream

No Escape Is Tense but Problematic

View All When Animals Dream News

Critic Reviews for When Animals Dream

When Animals Dream has all the markings of a first film, but there's enough going on to make it a memorable and important entry in the intriguing, complex werewolf subgenre.

Mr. Arnby knows all the genre codes, and how to subvert them when necessary.

When Animals Dream congeals its influences into something intimate, intelligent, and occasionally quite haunting.

Joining the indie monster-girl genre alongside "Ginger Snaps," "Teeth" and "Let the Right One In" is this melancholy Danish werewolf tale from debut director Jonas Alexander Arnby.

Lycanthropy has rarely been more lethargic than in When Animals Dream, a dreamy Danish import about a young girl who responds to the discovery that she's a werewolf by pouting and brooding a lot.

if Jonas Alexander Arnby's feature debut is a tale of a young woman's coming of age amidst smalltown narrow-mindedness, the film amplifies these familiar elements through the tropes of a different genre.

Danish horror thriller When Animals Dream (Når dyrene drømmer) takes a brooding art-house approach for [its] dark coming-of-age story, but given that the mood here is more dull than eerie, a touch of schlocky exploitation might not have gone amiss.

A Danish export with a surprisingly tender take on the werewolf myth.

Its narrative vacuum is big enough to make you mad at this melancholy werewolf drama for not being, at the very least, good.

A haunting atmosphere drives this subversive Danish thriller that generates some modest frights without relying on gratuitous gore.

When Animals Dream lingers a bit longer than it should, but an intense finish ensures that horror fans will enjoy this coming-of-age tale - if they've stuck around to see the end.

Matt Donato
We Got This Covered
View All Critic Reviews (22)

Audience Reviews for When Animals Dream

I wish there were more elegant and subtly effective films operating to expand this specific mythology the way this film does.

This is a better movie than the rating would imply. This is really more of a drama about a teen's sexual awakening, as the description here mentions, coupled with the fact that this awakening unleashes a monster within her, something that she inherited from her mother and the film looks at how she, and her father, adjusts to her changes and their attempt to keep the rest of the rural town from finding out. What I like about this film is that, even though it's artsy, and there's nothing wrong with that, it moves at a good pace. It's only 85 minutes long, so you'd think it would have to move at a good pace, but the length has nothing to do with how well-paced a movie is. You can have a two hour movie that feels like it's half as long as that. The thing in some art house films, and I enjoy them when they're great as much as anybody, is that sometimes they're so poorly paced that an 80 minute movie ends up feeling like 180 minutes. It's not that they're bad, it's just that they drag scenes on for far too long past their breaking point. This movie, however, ends up feeling rather short in comparison. Which, to me, was a problem. I don't know why, but I felt that more time could've been spent on character development. Like showing the father struggle more to maintain the normalcy after Marie finding out what she is. You get some of it, of course, this man has, surely, spent most of his adult life looking after both his wife and his daughter due to their conditions, so there's something there that you can play with. Not that I blame the movie for keeping things short and sweet, it's just that the film's characters end up lacking real depth. It's not that they're one-dimensional, because they're not, but they don't feel like fully formed characters. They're on their way, but they're not quite there yet. There's a requisite love subplot, but it does works in these setting as it does showcase a side to Marie that she never knew she could have, so it's actually beneficial, though not by much, to the overall arc. The film is also beautifully shot and the acting is real solid. I also liked the fact that while it's obvious that Marie is a werewolf, she never like fully transforms into the traditional werewolf, where it's either CGi or a person under a costume. The problem with a lot of these CGi, or costumed, werewolves comes in the fact that there's a certain disconnect from the character and the monster that's horrifically killing all these people, because you know it's not the same person, or character. This film, smartly, shows a change in Marie's appearance but not to the point where you completely forget that it's her that's doing this. There's not that disconnect, so I thought that was cool and something I wish more films like this did more of. While the film's brevity is part of its strength, it also ends up being part of its weakness as you never really get to see the characters at their most effective. Which is a shame, but I still really enjoyed this movie. I say this often, but this is a really good good movie. It might not make sense to you, but it does to me. I'd recommend it to horror geeks, it's not gonna be something that manages to appeal to a broader audience like Paranormal Activity.