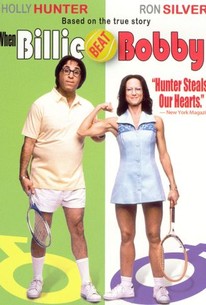 This 2001 TV docudrama relates the story of tennis' 1973 "Battle of the Sexes" between Wimbledon champions Billie Jean King (Holly Hunter) and Bobby Riggs (Ron Silver), an event considered by many to be an early victory for feminism. Riggs, 20 years past his prime, lives to wager on anything and everything. Seeing the rise of feminism, he decides he can make some money by challenging top female players, 30 years his junior, into exhibition matches. His first choice for an opponent is Billie Jean King, but she turns him down because she is too busy organizing the members of the female tennis tour into a de facto union, and winning tennis tournaments. After Bobby defeats the number one female tennis player in the world, Margaret Court, King realizes she needs to beat him. Following months of hype in which Bobby's bluster is matched at every point by Billie's confidence, the two face off in the Astrodome before a huge live and television audience. When Billie Beat Bobby was written and directed by Jane Anderson who had previously written The Positively True Adventures of the Alleged Texas Cheerleader Murdering Mom, which also featured Holly Hunter in the title role.

In the superb hands of writer-director Jane Anderson, and with unimprovable performances from Holly Hunter and Ron Silver, When Billie Beat Bobby becomes a funny and fulfilling television event.

Hunter, as usual, steals our heart.

Hunter and Silver elevate this game into something pleasantly surprising.

Enjoyable retelling of a seminal event in the women's movement towards equality is made stronger by having a well cast Holly Hunter and Ron Silver in the leads.