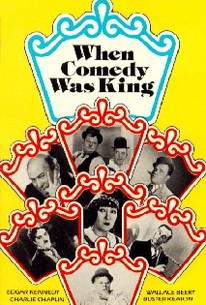 When Comedy Was King Photos

Producer Robert Youngson puts together a nostalgic montage of silent era comedy clips. Featured are Laurel and Hardy, Fatty Arbuckle, Buster Keaton, Gloria Swanson, Edgar Kennedy, the Keystone cops, Charlie Chaplin, Wallace Beery and others. The narrator, Dwight Weist, gives insightful though sometimes inaccurate information about these silent screen immortals. This film and it's previous effort "Golden Age Of Comedy" helped to introduce a new generation to these comedy classics and created legions of new fans. This is the first in a series of comedy compilations produced by Youngson.

Dwight Weist
as Narrator
View All

Critic Reviews for When Comedy Was King

How can you go wrong with Charles Chaplin, Buster Keaton, Fatty Arbuckle, Laurel and Hardy, Ben Turpin, the Keystone Kops and other favorites of the silents?

Yet another of these hundred-years-hence social historian's documents, with almost as much fun for the Freudians as the nuns have to offer.

There are no featured reviews for When Comedy Was King at this time.

When Comedy Was King Quotes