Otac na Sluzbenom Putu (When Father Was Away on Business) (1985) 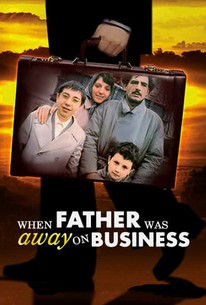 Otac na Sluzbenom Putu (When Father Was Away on Business) Photos

The Yugoslavian When Father Was Away on Business (Otac na Sluzbenoh Putu) takes place in the early 1950s. The title is a euphemism: because of the strained relationship between Yugoslavia and the USSR, various private citizens have disappeared in the middle of the night, accompanied by the police. One such "vanishing" individual is Miki Manojlovic, the father of 6-year old Moreno D'E Bartolli, from whose viewpoint this story is told When Manojlovic, an employee in the labor ministry is whisked away to prison, his family reacts with pride, assuring one and all that he is "away on business" because of his fervent political beliefs. The sad truth: Manojlovic has ended up behind bars because of his sexual peccadilloes. The film details the tribulations of a fatherless family struggling to cope with the financial deprivations of Communism. Director Emir Kusturica won the Cannes Film Festival Golden Palm award for his work on When Father Was Away on Business. ~ Hal Erickson, Rovi

It's not a particularly dynamic film, but I liked Kusturica's compact camera moves and bleary sense of whimsy.

This charming saga, winner of the top Cannes Film Fest award, tells the story of one family in Yugoslavia circa the eraly 1950s, when politics invased every aspect of life.

A beautifully observed, impeccably performed piece of Chekhovian drama in which a boy, his family and society all sleepwalk through the nightmare of Yugoslavia's Titoist reformation.

Karanovic turns Kusturica's tendency to make an epic out of everything he touches into something that's worth the agonies of his extended sentimentality.

Offers a revealing glimpse of life in Yugoslavia during the 1950s, a time of political transition.

I tend to read friends reviews because I always want something new experience and it helps me discover gems that I otherwise would have never seen. Which brings me here today reviewing When Father Was Away On Business and it's gonna be really hard for other Yugoslav movies out do this classic. When Father Was Away On Business plots deals with family and political issues in post WW2. What really caught me by surprise is how invested I became with it characters that I didn't notice the political context of movie until the end of film. This film effectively illustrates the absurdity of the oppression of free speech and any system used to try and enforce it in such an effective way that it makes you think. It handles it political message very well and doesn't shove its beliefs down your throat. Mesha, played by the magnificent Miki Manojkovic, is a very dynamic character. He's a father who's very caring about his family, but has no shame about cheating on his wife. All the characters feel fleshed out and it's makes them actual people. My favorite scene, which I won't spoil for those who haven't seen it, it involve Malik losing someone he loves which I found heartwarming and tragic at the same time. When Father Was Away On Business is a rare historical movie that balances romance and politics so well anyone can get into it. The cast played a huge role in making this good. Every part and every character was played by the right actors that it felt like I watching reality. The direction is masterful smoothly telling a story and keeping its viewer engaged. Now I notice When Father Was Away was nominated for an Oscar for best foreign film and didn't win. Which have made sense if Ran had won it since it was nominated in the same category that same year, but it lost to La Historia Oficial (The Official Story). Despite not winning best picture, it's a film that truly worth that award and worth watching. When Father When Away On Business is historical, political, and romance in a perfect combination in such a quality film. This is truly worth a watch.

One of my favourite movies of all times! Best Yugoslav movie ever! Kusturica became legend with it and there is a reason why!Everything is done perfectly and there was no surprise when it won 1985 Cannes Film Festival Palme d'Or (Golden Palm) and the FIPRESCI Prize... I am still not sure why was nominated for the 1985 Academy Award for Best Foreign Language Film but it did not win it... politics, maybe? Set in post-World War II Yugoslavia during the Informbiro period, the film tells the story through the eyes of a young boy Malik. His father Mesa (played by Miki Manojlović) has been suspected of working for Cominform and sent to a labor camp after a careless remark about a political newspaper cartoon. The movie opens in June 1950 with a local's serenading field workers. He sings Mexican songs because it's "safer", and children climb trees and play around. The story is from the perspective of the boy, Malik, whose mother Sena tells him that his father is on a business trip. Malik is a chronic sleepwalker. After a while, Mea's wife and children rejoin him in Zvornik. Malik meets Maa, the daughter of a Russian doctor. He falls in love with her, but last sees her when the ambulance takes her away. At the wedding of his maternal uncle Zijah, Malik witnesses his father's affair with a woman pilot. She later tries to commit suicide by using a toilet's flush cord. Sena reconciles with her brother Zijah, who's been diagnosed with diabetes. Read that again... crazy story becomes real life, and real life becomes crazy story, and everything is so smoothly run by the Master himself: Emir Kusturica!

Otac na Sluzbenom Putu (When Father Was Away on Business) Quotes