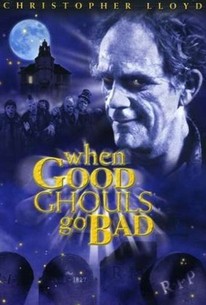 Based on a tale by "scary story" maestro R.L. Stine, the made-for-cable movie stars the inimitable Christopher Lloyd as an energetic zombie (replete with detachable limbs) known as Dead Uncle Fred. The moribund hero can be seen and heard only by his 12-year-old nephew, Danny Walker (Joe Pichler), who has just moved to a small Minnesota town with his family. When his freshly hung Halloween decorations begin to mysteriously disappear, Danny and Dead Uncle Fred join forces to rid the community of the bizarre curse which prevents the citizens from celebrating or even mentioning the spooky October holiday. The answer, involving a long-dead artist named Curtis Danko, is found in the deserted chocolate factory which Uncle Fred had managed during his "mortal" years. Rated PG for "mild horror action" (including a devilishly clever climactic sequence straight out of Night of the Living Dead), When Good Ghouls Go Bad originally aired over the Fox Family Channel on October 21, 2001, nearly two months after its video and DVD release.

It's actually better than it has any right to be.

I got scared watching this silly kids movie...