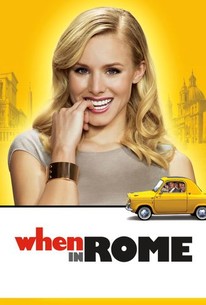 When in Rome Photos

Kristen Bell steps into the romantic comedy realm with When in Rome, a Buena Vista production following a lonely woman's good fortune with the opposite sex after swiping a few coins from a wishing fountain while on a vacation in Rome. Mark Steven Johnson directs from a script by David Diamond and David Weissman, with Danny DeVito, Jon Heder, and Dax Shepard co-starring as some of the hopeful suitors.

Will Arnett
as Antonio

Lawrence Taylor
as Himself

David Lee
as Himself

Brian Kenny
as Himself

John Mainieri
as Man in Elevator

News & Interviews for When in Rome

Critics Consensus: Darkness Balances on the Edge of Freshness

View All When in Rome News

Critic Reviews for When in Rome

You know from the start of Mark Steven Johnson's silly, sunny romcom how it's going to end.

This Italian-themed romcom is not quite the most unspeakably-patronising-to-Italy film of all time. That prize belongs to the musical Nine, starring Daniel Day-Lewis. But it runs a very close second.

I'm not cynical about hope, just the way that romantic comedies exploit it, without necessarily delivering. When in Rome does that to a large degree, even basing its conceit on a wishing well, the ultimate exploitation of hope.

It manages to be reasonably fun, kind of funny and just a little charming, and will be fine to watch with your Disney rom-com loving kids on DVD.

Succeeds only in displaying Bell's lack of comic flair.

The dialogue is terribly forced, the acting is exaggerated, and the characters are excessively fake.

Cute and charming enough to pass for a matinee date.

WHEN IN ROME. A gift from the comic gods themselves.

Fun and girly are key adjectives in this movie.

My kind of romantic comedy. It's funny, a bit silly and doesn't try to set the new standard for romance in the genre. It's exactly what you expect, but in a good way.

Most of the troubles come from the painfully unfunny shenanigans of Beth's magic-stricken admirers.

Audience Reviews for When in Rome

Critics hate it, and I totally get the things they will rip apart, but even with it's generic flaws...I really enjoyed it! I loved every second of it. Kristen Bell is adorable and Josh Duhamel is really likeable. The supporting characters are played by a perfect mix of odd actors like, Danny DeVito and Jon Heder. I also thought there were some genuine funny moments, which are always welcome in a modern rom-com. Oh...nice cameo from the dude that plays Pedro in Naploeon Dynamite! One thing that I didn't like however was the pacing. I felt like the two main characters met, then they were instantly in love, and then there was immediate conflict. I will admit that I fell for it, but I think the pacing could have been better. I definitely recommend this one though...I liked it!

Yet another adorable romantic comedy :) Kristen Bell is just too cute & a great actress :) :) :)

Josh Duhamel is the very definition of non-personality, and Kristen Bell, who can be quite charming and naughty, came off as very one-note. There were a few moments, but mostly pretty awful.

When in Rome Quotes