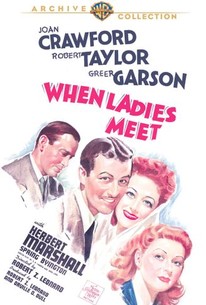 Strange Skirts is the TV title of the 1941 MGM film When Ladies Meet. The film was a remake of a 1933 production of the same name, which starred Ann Harding, Myrna Loy and Spring Byington; their roles were taken over in the remake by Greer Garson, Joan Crawford and Spring Byington. Both films are based on a Rachel Crothers play about a lady novelist who falls in love with a married publisher. The novelist (Crawford) meets the publisher's wife (Garson) at the home of a chatterbox society matron (Byington). The fact that the 1941 version was forced to undergo the censor's scissors to a greater extent than the 1933 film was compensated by the later version's lusher production values, which earned an Academy Award nomination for MGM art director Cedric Gibbons and Randall Duell. Under both its original title When Ladies Meet and its TV-dictated cognomen Strange Skirts, this dated but enjoyable film has become a "standard" on the various cable TV services of Ted Turner.

Olaf Hytten
as Mathews the Butler

Mary Forbes
as Mother at Party

Barbara Bedford
as Anna the Maid
View All

Critic Reviews for When Ladies Meet

It's a glossy MGM star vehicle film for both Crawford and Greer, who give sharp performances besides looking so appealing.

Audience Reviews for When Ladies Meet