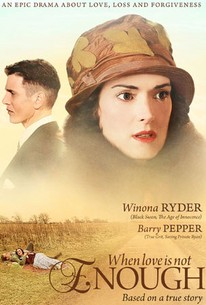 When Love Is Not Enough: The Lois Wilson Story Photos

Winona Ryder stars as Lois Wilson, co-founder of Al-Anon and wife of Alcoholics Anonymous co-founder Bill Wilson (Barry Pepper), in this biopic centered on the rocky relationship between the two people who dedicated their lives to helping others who suffer from alcohol addiction. College graduate Lois Burnham was spending the summer in Vermont when she first met her future husband Bill. Teenage sweethearts, the paid married in 1918, just before Bill went overseas to fight in World War I. Lois worked as an occupational therapist while Bill was in Europe, and upon his return the couple tried unsuccessfully to start a family. It was during this time that Bill began drinking more than usual, but after landing a job at a local financial firm the hard-working veteran landed a high-paying job as a Wall Street securities analyst in 1927. For a while the couple was financially secure, and Lois tried repeatedly to help Bill to get his drinking under control. But it was all for naught; eventually Bill's alcoholism would cost him his job, his home, and nearly his relationship with Lois. It wasn't until Bill met Dr. Bob Smith, another recovering alcoholic, that he found the strength to finally sober up. Meanwhile, Lois was devastated by the fact that all of her own efforts to help Bill had ended in failure. After connecting with the wives of Alcoholics Anonymous members, however, Lois finally found her calling, founding Al-Anon in 1951 in order to help the family members of alcoholics build a functional support system for their loved ones.

Nancy Palk
as Joan
View All

Critic Reviews for When Love Is Not Enough: The Lois Wilson Story

When Love Is Not Enough has some interesting moments, but ultimately flattens its characters in the interest of letting us know its commitment to its message is unambiguous.

Audience Reviews for When Love Is Not Enough: The Lois Wilson Story

There are no featured audience reviews yet. Click the link below to see what others say about When Love Is Not Enough: The Lois Wilson Story!

When Love Is Not Enough: The Lois Wilson Story Quotes