When Marnie Was There2015 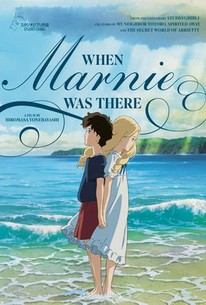 Critics Consensus: When Marnie Was There is still blessed with enough visual and narrative beauty to recommend, even if it isn't quite as magical as Studio Ghibli's greatest works.

Critics Consensus: When Marnie Was There is still blessed with enough visual and narrative beauty to recommend, even if it isn't quite as magical as Studio Ghibli's greatest works.

Critic Consensus: When Marnie Was There is still blessed with enough visual and narrative beauty to recommend, even if it isn't quite as magical as Studio Ghibli's greatest works.

When Marnie Was There Photos

Sent from her foster home in the city one summer to a sleepy town by the sea in Hokkaido, Anna dreams her days away among the marshes. She believes she's outside the invisible magic circle to which most people belong - and shuts herself off from everyone around her, wearing her "ordinary face". Anna never expected to meet a friend like Marnie, who does not judge Anna for being just what she is. But no sooner has Anna learned the loveliness of friendship than she begins to wonder about her newfound friend... Based on the novel by Joan G. Robinson, When Marnie Was There is the newest film from Studio Ghibli, and the second feature film by Hiromasa Yonebayashi, the director of The Secret World of Arrietty.(C) GKids

Yo Oizumi
View All

News & Interviews for When Marnie Was There

View All When Marnie Was There News

Critic Reviews for When Marnie Was There

The quasi-Sapphic intensity of Anna and Marnie's relationship - recalling Ghost World or a benign Heavenly Creatures - is poetically and sensitively handled.

While Marnie lacks the densely mystical, immersive quality of Ghibli at its best, the film features characteristically exquisite hand-drawn animation and a sensitivity to the precarious, friable quality in an adolescent girl's self-worth.

The painterly, old-school aesthetic brings an aptly nostalgic feel to this examination of how the past can haunt the present and the rapturous intensity of young friendship.

The film has a mournful delicacy and sense of mystery about it which counterbalances its sentimentality.

The gentle, unforced charm of the animation feels like the very best of book illustration come to miraculous life, but with a strong, almost Hitchcockian streak of excitement and danger.

An intimate, emotional journey, which may lack the scope and scale of previous Ghibli adventures, but remains a bittersweet sayonara for the studio.

Does what Ghibli has always done, and done so well: Address the cruel twists and turns life can take.

It's amazing how [Studio Ghibli] can so easily tap into the wonder and awe of young people.

There is a pervading sense of melancholy in this film, but you cannot help but be swept up in its stunning beauty. It is a totally immersive experience, like dipping your head into a watercolour painting and swimming about in it for two hours.

Overall, When Marnie Was There is lovely to watch but it fails to provide the celebratory ending that Studio Ghibli deserves after 30 years of animation.

The most Ghibli-esque touch here is the way that the natural and spirit worlds easily commingle, like overlapping cels in the same frame.

The mystery surprised me at times and kept a brisk pace.

Audience Reviews for When Marnie Was There

The animation is gorgeous like everything Studio Ghibli makes (though this is perhaps its final production, following Miyazaki's retirement), but the film is not without its flaws, such as trouble with pacing and a twisty plot whose revelations are more predictable than insightful.

There will never be enough words in the dictionary to describe how incredibly thought-provoking the films that come from Studio Ghibli are. "When Marnie Was There" is no exception to that statement. Following an introverted girl, outcast by her peers at school and being diagnosed with asthma, Anna is sent away to a relatives house in the country. Filled with trees, water, and an environment that she will feel at home in, we begin to see more of the inner-Anna as the film progresses. At the films core, it is about a young orphan girl, who is looking to find herself. She comes across a young girl named Marnie and their friendship blossoms quickly and fiercely, leading to plot twists that will have you in tears. This film is truly magnificent for everything it sets itself up for, and the payoff is emotionally satisfying in every way. This studio always knows how to write a compelling story and execute it in such a beautiful way. As always, the animation is crafted to perfection and each element has meaning. Of all the films I have had the pleasure of seeing in 2015, this is definitely one of my favourites. I truly do not have any complaints about this picture. Any questions or concerns you may have throughout the duration of this film, will be answered by the time the credits role, and if you end up enjoying this film as much as myself, you will not want that to happen. I wanted this film to keep going and going. "When Marnie Was There" is one of my favourite films from Studio Ghibli and one of the best films of 2015.

When Marnie Was There (2014, Japan) is yet another picturesque Studio Ghibli production with a beautiful sketch of Japanese countryside. Very much different from its predecessors in terms of narrative and propagating themes on self-discovery and self-formation with a hint of thriller and mystery, When Marnie Was There is truly a Studio Ghibli classic guaranteed to warm your heart and pinch you in all the right places.

When Marnie Was There never fulfills on its grand promise of something profound. Anna and Marnie strike up a friendship and their interactions allow the previously withdrawn Anna to open up. The two frequently abscond away together in clandestine meetings that suggest a rapport that is far more intimate. It reaches an apex when a jealous Anna questions Marnie about dancing with a boy. You're certain that something more will come of this. But nothing does. Later there is a scary interlude that resembles a Gothic tale involving an old abandoned silo that terrifies Marnie. More suggestions of something grander than what is actually presented. The denouement ultimately ignores all of these plot threads and settles into a resolution that doesn't effectively address the issues with which this poor kid is struggling. She was really messed up and the reveal is totally disconnected from what this girl had been feeling. Sill, the picture is too visually hypnotic to ignore. The soundtrack, both the music and the sounds of the environment, create a lavish atmosphere that is spellbinding. I liked When Marnie Was There. I just didn't love it. fastfilmreviews.com

When Marnie Was There Quotes