When The Game Stands Tall2014 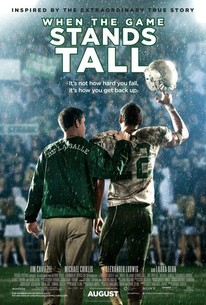 Critics Consensus: An uneasy blend of solid game sequences and threadbare inspirational sports drama clichés, When the Game Stands Tall is overshadowed by better players in a crowded field.

Critics Consensus: An uneasy blend of solid game sequences and threadbare inspirational sports drama clichés, When the Game Stands Tall is overshadowed by better players in a crowded field.

Critic Consensus: An uneasy blend of solid game sequences and threadbare inspirational sports drama clichés, When the Game Stands Tall is overshadowed by better players in a crowded field.

When The Game Stands Tall Photos

Inspired by a true story, WHEN THE GAME STANDS TALL tells the remarkable journey of legendary football coach Bob Ladouceur (Jim Caviezel), who took the De La Salle High School Spartans from obscurity to a 151-game winning streak that shattered all records for any American sport. When the streak is broken, and tragedy strikes the team, Coach Lad must teach his players - and the entire town - that it's not about how you fall, but how you get back up. (C) Warner Bros

Maurice Jones-Drew
as Himself

News & Interviews for When The Game Stands Tall

View All When The Game Stands Tall News

Critic Reviews for When The Game Stands Tall

When the Game Stands Tall is one of those cliché-riddled feel good movies that, by trying too hard to be inspirational, ends up as cloying and overly sentimental.

The real-life story behind When the Game Stands Tall sounds amazing. But for all its exciting sports scenes, the movie version falls flat as drama.

Most often in its early stages, the melodrama onscreen edges precipitously close to dissolving into a puddle of platitudinous pabulum served in the manner of a rote Sunday school lesson.

Why must an extraordinary story beget such an ordinary film?

A true tale of high school football achievement becomes a strained, by-the-numbers grab bag of uplift in the Christian sports drama "When the Game Stands Tall."

For football fans the movie brings a famous story to life. For the rest of us it plays like an after school special with better production value.

One of the better inspirational sports stories to come along in recent years.

The finished product did not do enough to make me forget this is another typical sports film. It felt generic, recycled, and forgettable.

Somewhere it's like a whole lot of people really liked this true story and tried really hard to make a movie out of it. The saddest part is that to me they totally failed at doing it and I think the real people in this story deserve way better.

It's an exceedingly passable product of a threadbare formula. It might even be enjoyable if Caviezel could muster the charisma necessary to carry the film.

Much of the film follows the expected sports film arc, but the performances, including Laura Dern as Beverly Ladouceur, are so spot-on, it's an enjoyable ride despite its familiarity.

Audience Reviews for When The Game Stands Tall

The one thing you can always count on when watching a football film, is that it's going to be exciting. It doesn't matter if it's a true story, like When The Game Stands Tall, or a made up one like Friday Night Lights. It doesn't matter if the team has won 100 straight games or lost 100 straight games. Every film about football is going to be exciting, so what makes one better than the other? The personalities involved, it all comes down to who the film is focused on and this film has it's eyes on the prize. Jim Caviezel stars as Bobby Ladouceur, one of the most successful high school football coaches of all-time. Ladouceur became a national celebrity, not only because of a big winning streak, but also because of the way he incorporated family values and religion into his coaching, trying to make his player more well-rounded individuals. Caviezel was outstanding, as he is in everything, but after watching six seasons of Person of Interest, it's almost disappointing seeing Caviezel in a role where he doesn't kill anyone. The other focus of the film is Alexander Ludwig, who portrays Chris Ryan, a kid who has all the talent in the world, but has to decide, if he's pushing himself toward greatness for himself or because of a psychotic father. Ludwig always gets second billing, but as with the Hunger Games, nothing would be as good without him. He is the unsung hero of this film as he rounds out the emotional roller-coaster. When The Game Stands Tall has action, emotion, conflict, religion, family, love, hate, a little bit of everything and believe it or not, at the heart of it all is a simple, stupid little game called football. This film was great, it reminded me a lot of the TV version of Friday Night Lights and it's an absolute can't miss for sports enthusiasts.

Based on a true story of a California Catholic High school football team with a 150 game winning streak, this inspirational drama has good moments but pales in comparison to Friday Night Lights or Remember the Titans. Jim Cavizel is very good as the head coach but the film breaks no new ground and seems like a rehash. The football sequences are extremely well shot and the acting is passable. Not a bad way to spend an afternoon but not much more! 01-01-2016

Based on a true story I actually rather enjoyed this. Good performances from the main leads and engrossing sports action keeps you watching.

When The Game Stands Tall Quotes