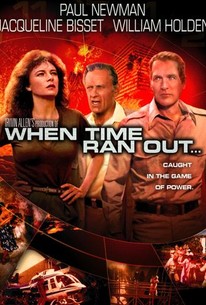 When Time Ran Out Photos

After producer Irwin Allen highlighted the dangers of fire in the Towering Inferno and the dangers of water in the Poseidon Adventure, he is back to fire again but this time it is within the earth, at least for awhile. This fairly routine disaster film is set on a resort island with a volcano that is beginning to rumble. Stars include a long list of names: Paul Newman is Hank, the savvy oil driller who gets people to safety even against their will, Jacqueline Bisset is the woman he is interested in, William Holden, Eddie Albert, Barbara Carrera, Veronica Hamel and several others play individuals trapped on the island. Hank convinces some people to follow him to the highest part of the island as the volcano gets set to blow its top. They encounter several dangerous situations after the dormant volcano wakes up but nothing quite like the non-stop, action filled, death-defying scenes from the explosion of volcano movies that hit the screens in 1997: Dante's Peak, Volcano, Eruption, Volcano: Fire in the Mountain, and a few more from around the world. They formed a virtual 1997 "ring of fire."

Bill Smille
as Man in Bar

Barbara Costello
as Woman in Bar

Bill Smillie
as Man in Bar

Critic Reviews for When Time Ran Out

To see Borgnine and Meredith's talent been wasted in such a way is really disappointing. [Full Review in Spanish]

The eruption, when it finally comes, is a wonderfully cheesy amalgam of wobbly back projection, bathtub tidal wave and scared expressions from the cast. It's not as hilariously awful as Swarm or Meteor, though, which is a pity.

...starts running out of entertainment value pretty early and continues on fumes until it sputters to a close.

With cheesy special effects (even the volcano isn't convincing, considering the film cost $20 million) and a hole-ridden script, this film offers precious little to like.

Audience Reviews for When Time Ran Out

Dumb unbelievable disaster movie from the end of that cycle that inexplicably stars some of the biggest stars of the 70's. Everybody seems pretty disengaged and it's sad to see William Holden once so vital and charismatic a burnt out shell, alcoholic and rather haunted. The special effects are laughably bad and the whole thing moves at a snail's pace.

When Time Ran Out Quotes