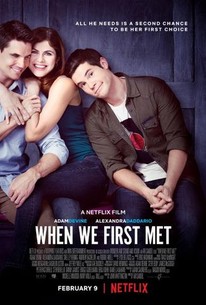 Critics Consensus: Much like its protagonist, When We First Met struggles in the cinematic "friend zone" -- and will face a slew of viewer breakups before finding much in the way of true love.

Critic Consensus: Much like its protagonist, When We First Met struggles in the cinematic "friend zone" -- and will face a slew of viewer breakups before finding much in the way of true love.

When We First Met Videos

When We First Met Photos

Noah (Adam Devine) spends the perfect first night with Avery (Alexandra Daddario), the girl of his dreams, but gets relegated to the friend zone. He spends the next three years wondering what went wrong--until he gets the unexpected chance to travel back in time and alter that night--and his fate--over and over again. Will Noah ever get it right? Directed by Ari Sandel (The DUFF) the film co-stars Shelley Hennig, Andrew Bachelor and Robbie Amell.

Critic Reviews for When We First Met

It'll take you roughly five minutes to realize that Noah is going about things the wrong way; it'll take him more than 90.

It's like being at a crowded restaurant and eavesdropping on the same bad first date over and over and over again. You'd probably want to move tables.

The potentially problematic premise is narrowly sidestepped because the film zigs when you expect it to zag... This watered-down rom-com doesn't fully deliver but it's a diverting twist on the genre nonetheless.

How the movie plays with time and its different scenarios elevates it above your average laundry-folding, background noise rom-coms.

Every tired rom-com checkbox is ticked, but this film still manages to feel fresh, is thoroughly delightful, and delivers pleasant, affable entertainment.

What's refreshing about When We First Met is that it comes with twists and heartfelt surprises.

Every moment of When We First Met could not be more painfully obvious, and that might be forgivable if there were an ounce of humor, a dose of charm, or a decent character in the entire film.

Romantic comedy vets will be able to figure out the ending early on. While it's predictable, the destination eventually makes the journey worthwhile and rewarding.

There are consistent genre conventions that appear throughout the runtime, but When We First Met manages to smoothly come together in the end with its romantic notions of fate and destiny.

Megan Moffat
Under the Radar

The script by John Whittington doesn't emphasize on the good enough to save the story from feeling limp. It isn't something you haven't seen, but it may entertain enough for a night in.

Worse than just bad, this movie is utterly harmless.

Audience Reviews for When We First Met

This is absolutely not my sort of thing. I watched When We First Met because Alexandra Daddario is in it and that is the end of my reasoning. But I was actually pretty pleasantly surprised. Not enough to come away from the movie with a hearty, wide-net recommendation, but it did give a fix for a lot of the problems that I usually find inherent in American Romantic Comedies.

Cute enough. I didn’t mind it till someone pointed out the main guy was trying to be a young Jack Black. Then it put me off slightly! But still an okay rom com.

The time concept has been done over and over but this is still a very fun flick. The biggest issue the film has is the balancing of humour and romance, the filmmakers stay between the two. DeVine is the star here and the rest of the cast have very little to work with, films like this have supporting cast that are provided next to nothing. Netflix needs to be careful with the films they are purchasing as this was a very run of the mill film that was only purchased on the backend of DeVine's current exposure. A film to pass the time but nothing more. 28-03-2018.

Netflix has been known to pick up independent comedies fairly often, and while I'm not opposed to a good quirky comedy, none of them have really stood out on their streaming service. That being said, When We First Met has been released unto the world recently, and it's probably one of the better ones in the genre, as far as their original content goes. When going into this movie having only seen a brief trailer that they released, I wasn't sure what to expect, but I surprisingly got a comedy that's a nice mixture of elements from movies like Back to the Future and Groundhog Day. No, there's no reality in which I would compare When We First Met to classics like that, but take the plot of those films and apply it to a romantic comedy and that's pretty much what you get. This is about as average as you can possibly get in terms of originality, but hey, I had fun with this movie. Following Noah (Adam Devine) as he meets the girl that he's destined to be with on Halloween back in 2014, this is a doomed romance that will only result in friendship for him. After being given the opportunity to travel back in time and alter reality as many times as he likes, he works very hard to make her his wife. This may not exactly work out for him, but the different scenarios that blossom from each of his decisions are funny to watch and the conclusion of the film does send a nice message. By the time this film had reached its climax, I was sold, even if it was just average throughout its entire duration. I think my mind was changed due to the fact that I enjoyed this cast so much. When it comes to quirky comedies, your film's pretty much doomed if your cast isn't completely present with their performances. To add to that statement, I was never a huge fan of Adam Devine when he first came into the spotlight a while ago. With his performances in the television show Workaholics to his appearances in the Pitch Perfect films, I found myself quite annoyed by his overacting. That being said, I have grown to enjoy him in movies nowadays and When We First Met is just another addition to his filmography that continues to win me over. He, along with Alexandra Daddario, Shelley Hennig, and Robbie Amell, all add quite a bit of fun through their performances, even though none of them were all that noteworthy. This is a film that surprised me in terms of comedy because I found myself laughing throughout the majority of this movie. Mind you, most of the jokes were juvenile, but for every joke that didn't work, I was latching onto the development of each of these characters. As I said, there's nothing to love about this film as a whole, but I'd be shocked if this cast didn't at least win you over during the dull or repetitive aspects to this movie. In the end, this is just a solid cast, in an average movie, elevated by funny dialogue and nice character progression. When We First Met is a neat premise, but it's been done many times in the past, so originality is already out the window upon first viewing. Netflix still hasn't hit their stride with feature films, but I'd say that this film's definitely moving them in the proper direction. When We First Met won't ever win a single award, nor does it deserve to, but the messages and the overall outcome is worth watching, at least for some viewers. If you have nothing better to do, there are far worse movies to watch.

When We First Met Quotes